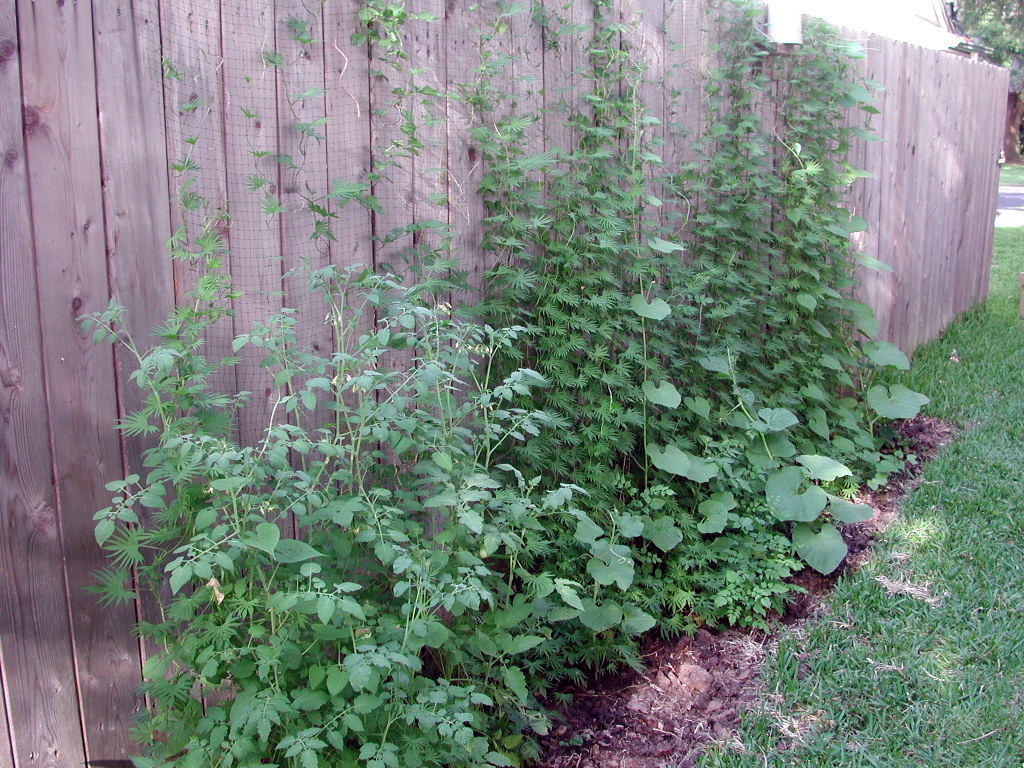 This is the flower bed (mostly flowers!) that I’ve planted to be able to see from the kitchen window. It’s along the side fence so the objective is to have vines that will cover the fence and have flowers up where I can see them. My favorites are the gourds (the big leaves in the picture — it’s not a great picture but the best I can do). There are also quamoclits (like a small red morning glory but with fringed leaves), moonflowers (like a big white morning glory that blooms after dark), some cardinal creeper (Campsis radicans) that migrated in from the other side of the yard and probably won’t bloom, and there may be some Heavenly Blue morning glories. I had some there last year and only saw their backs — they want to face east apparently. I collected a lot of seeds but from the looks of things got few or no morning glories. But I love the gourds. They have bright yellow funnel-shaped flowers that open early in the morning and close by mid-morning, so if I snooze, I don’t see them. The flowers only open one day but I don’t know if that’s because they get pollinated or if they only open one day no matter what. I love the huge leaves and their strong smell. I love the way they know which way is up! They seem to grow slowly until they find something they can get a tendril on and then they really shoot up! The one at the far end was well over a foot above the top of the fence before I redirected its energies. The moonflowers, on the other hand, will climb the fence if they’re carefully trained onto it, but they don’t care about going up, they will dawdle all over the place. I love the way the gourd tendrils wrap around and around whatever they can latch onto — it’s serious overkill. It’s cool to get gourds (fruit) too although I don’t care as much about that. Last year I had the little warty ornamental kind. This year I’ve planted dipper gourds and birdhouse gourds. I don’t really need any dippers but it would be fun to get a birdhouse gourd, since the wrens are shunning the wren house (OK, the roof is coming loose but I have really tried to fix it).

At the left are some volunteer tomatoes that reseeded from plants I had there last year. Unfortunately I wasn’t paying attention when I bought them and they are cherry tomatoes. I didn’t get many tomatoes from them last year because they sprawled out in the grass, didn’t get enough sun, and basically rotted on the ground. But the volunteers are standing bolt upright. They’re helped by the quamoclits which have climbed them, then latched onto the fence and continued on up, so the tomatoes can’t fall over no matter how much they want to.

All these things really should be in bloom now but they’re just getting started because I planted them late. I’m trying to lose my ingrained northern mentality that late May is planting time and I did get this stuff going in March but it still could have been earlier.

2 Responses to “I love gourds!”

Your site is a true inspiration. On days when I don't feel like stitching I visit your site to be inspired. Needleworkers of old would truly be proud of what you have to offer.