In October we trapped a bunch of feral cats and took them to the Humane Society to be fixed. The vet told us that one of the cats had had kittens recently, and recently she started bringing her kittens to our garage to eat. There were only two kittens, which is a small litter. (I hope it isn’t the case that there were originally more and something happened to the others, but we once had a cat that gave birth to a single kitten, so perhaps spotty nutrition accounts for the small litter.) The kittens are absolutely adorable — aren’t kittens always? They are probably about 12 weeks old. 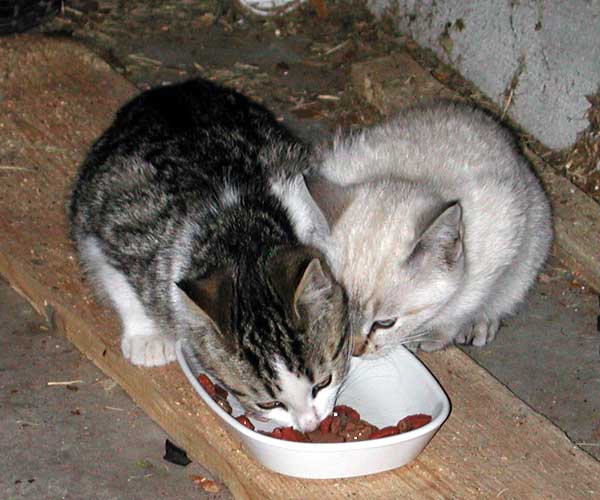 The kittens pretty much lived in our garage for a while, back in the shelves on an old bath mat. More recently the older cats have been showing them the ropes, the pond in the back yard for water, the leaf pile for other needs, etc. They are very playful, jumping each other, swatting older cats’ tails, playing “King of the Mountain” in the silver maple, and on and on.

After much agonizing about what would be best for them, we captured them and are working on getting them used to people so that they can have homes. (The Humane Society’s adoption program won’t take them unless they are friendly.) I would LOVE to have them here but Lucky, who is very easily stressed, would go crazy if he thought MORE cats might be coming to live here. Instead, a friend agreed to foster them, and they’re currently living in her guest bathroom. (A bathroom is a good place to start new kittens because they can’t get someplace where they aren’t retrievable, they can’t do any damage, and it’s a small space. When we brought Lucky home and let him loose, as he discovered what a big world he was suddenly in, he got more and more panicky. He was much happier in the bathroom until he got used to things.)

At first the kittens were not very happy with the strange hard white surfaces. 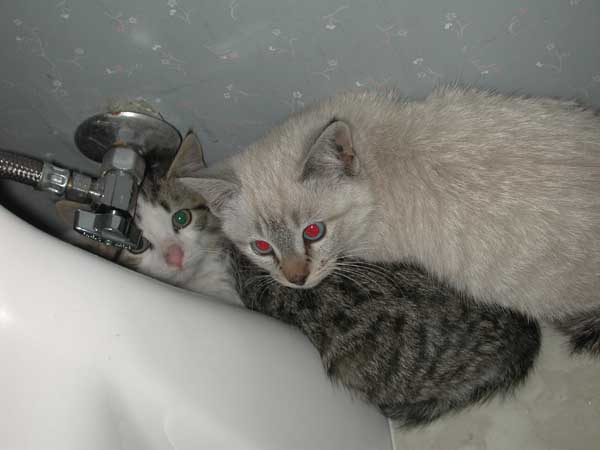 But they have quickly gotten more comfortable. 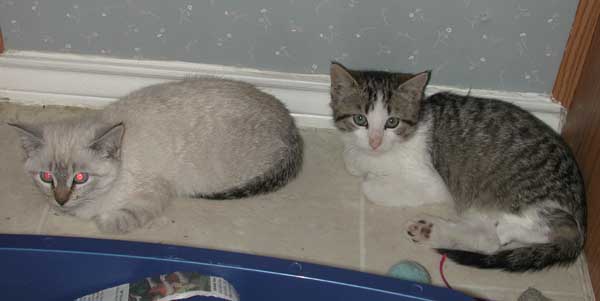 (I wish I could get a picture without the glaring red irises but you can see that Little Pearl has blue eyes — she’s a beautiful kitten.)

My friend and her husband visit them often in the bathroom, and we’re visiting also most days. Little Pearl is already allowing herself to be petted. They have lots of toys and apparently are having a pretty good time for themselves, and I’m glad they’re not outdoors — they were born very late in the year and it’s cold out. So I trust this story will have a happy ending. We’ll probably try to find them homes ourselves without going through the Humane Society — not that I have anything against the Humane Society, but Lucky was there only 5 days and he caught the feline equivalent of kennel cough and almost died, although he was younger and smaller than these two. If we can tame these guys, get them their shots, and send them directly to a good home or two, that would be best.

Update: here’s the latest picture — they are in the bathroom sink. 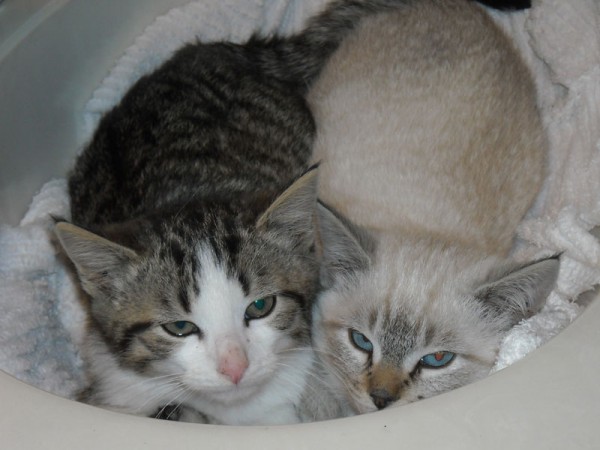 One Response to “Kittens!”

What a treasure I just found while searching for a cross stitch site. I am sitting here in awe as I view your beautiful patterns and can't wait to choose one and wait for it's delivery. I never knew such beautiful patterns could be purchased. Thank you!