I’ve finished the top row of blocks in the blackwork (redwork? whitework?) ABC.

I apologize for the mediocre picture but as usual, I took the pictures, moved them to the computer, and looked at them later to discover that the focus could be better. I would have started over but unfortunately I left the camera on so the batteries are dead (the camera shuts off automatically but apparently not when it’s connected to the computer). AND although I have 4 or 5 battery chargers and several sets of batteries, some of which I think don’t work, I can’t even find most of them right now. I probably just need to start completely over with new batteries and chargers. I think one charger got zapped and has destroyed whatever batteries I put into it subsequently. Some of them seem to charge in other chargers (at least the lights eventually go from green to red) but they don’t work in the camera. Anyway — if I ever get some more batteries charged I’ll try for a better picture.

Here’s a detail of some of the topstitching. 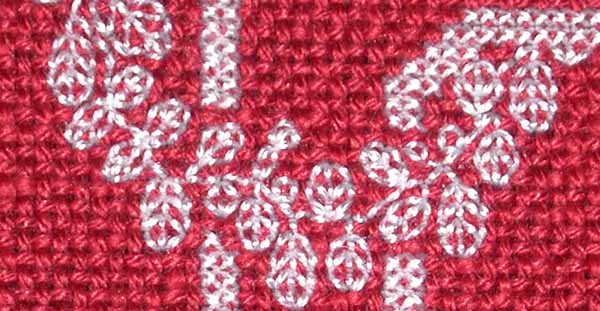 I am tempted to put this aside and start working on another Scarlet Quince for a while, but I can’t decide what I want to work on next. I’m leaning toward Hopper’s Mansard Roof at the moment.

I was also thinking about “Splendid”

or “Still Life with Fruit and Pocket Knife” but I feel like I have done enough fruit or a while. So temporarily I’m racing ahead to the letter D while I try to make up my mind. I know some people have a good system of rotating from one project to another but I suspect if I start something else, I’ll finish it before I come back to this — so maybe I should just finish this!

--very much enjoy viewing the beautiful patterns; they look like painting and I like how you use the many shades of color to achieve the beautiful results.