Several of our patterns are available in two sizes (two stitch counts, which makes the finished piece different dimensions). Many people ask, “How are they different? They look the same.”

In general, we make our patterns as small as possible (believe it or not!) while still preserving the important detail of the original work. Sometimes, though, it’s possible to make a somewhat smaller pattern which is not quite as detailed, but still very good, and a lot fewer stitches. Think about it: a 200 x 200 stitch count pattern is 40,000 stitches. 180 x 180 doesn’t sound much smaller, but it’s only 32,400 stitches. A 9% decrease in the sides (width plus height) results in a 19% decrease in the number of stitches!

So how are they different? Here are a few examples.

Take the Fair Face of Woman comes in two sizes, 197w x 250h, and 315w x 400h. On the pattern pages they look the same. If you click the pictures to see the fixed scale views, you can see that one is larger and one is smaller, but you still may not be able to see any difference.

Compare the eyes.Â  In this case, all the same features are there, the shading in the eyelid, the lighter blue below the pupil — it’s just that they are larger in the larger version. 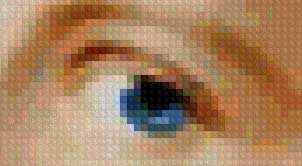 An area where a bit of detail is lost is in the beaded bag. Most of the beads are there in both bags — but the one that the fairy’s finger points to is mostly missing in the smaller bag. (It helps to get back from the screen a few feet to see this.) The beads in the larger bag also have a little structure (darker spots in the center of the beads) which is missing from the smaller bag. 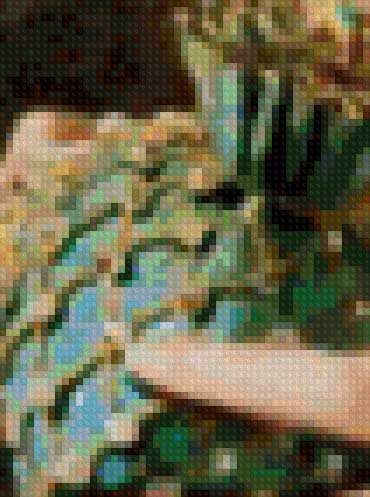 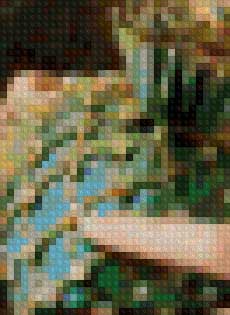 As you can see, these are not very momentous differences.

We are also working toward having all of the Lady and Unicorn tapestries in two sizes. Here the differences are quite subtle (given that the original tapestries are so large, many of the details such as the flowers are rather impressionistic even in our larger pattern). Compare two dogs from Lady with Unicorn: A Mon Seul Desir (this is the dog near the upper right corner). 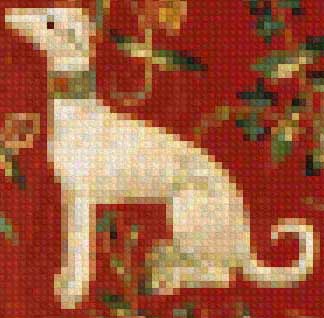 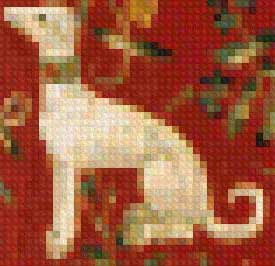 The biggest difference in the two dogs is that the smaller dog’s ear nearly disappears. The smaller dog is a little blockier, too, as there’s less room for shading stitches to fill in the curves. The flowers are almost the same. Consider, though, that there’s a 15% difference between the two charts in width plus height, and the smaller one has 30% fewer stitches!

So: if you prefer a smaller finished piece, or just want to do fewer stitches, you shouldn’t hesitate to do the smaller version of any of our charts. If you really love the picture and want all possible detail, or prefer a larger result, do the larger one. Either way, you’ll get good detail.

9 Responses to “Large patterns vs small — what’s the difference?”

Thank you so much for your website. I have been looking for a cross-stitch site that has patterns that are outstandingly beautiful. I have searched many sites and have found very few that meet the quality of patterns that your site represents!!