Here is my first attempt at a needle book. How many problems can you see (besides being sideways — you don’t get credit for that one)? 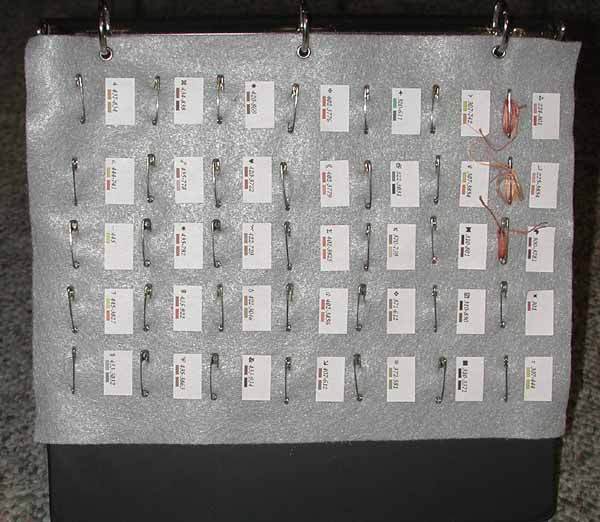 First, the felt. It is “made in the USA of 100% eco-fi (polyester made from recycled post-consumer plastic bottles)”. While this sounds good in theory, it’s irregular in thickness, slick-feeling, and just plain nasty. You can see how plasticky it looks, and the floss labels don’t stick to it as well as they might. This is all JoAnn and Michael’s had. I don’t know if anyone has cotton felt anymore — maybe you can buy it by the yard if not by sheet (I didn’t look at the yard goods at JoAnn). If not, I’ll probably get some flannel and sew it into a double thickness.

Second, if you want to put your “pages” into a notebook, cut the felt so that it fits before you do anything else. These felt sheets were 9″ x 12″. The width was OK but I should have cut the sheet to 11″ so it didn’t stick out past the end of the notebook.

I had a bunch of 1/4″ grommets so that’s what I used but this limited me to a pretty small binder. Most of my binders have rings that are too big for 1/4″ grommets. (SOMEONE who lives here but is not me ruined my grommet hole-making tool — looks like he hammered it. What on earth? I don’t know if it would have been able to cut through this plastic felt even if the edge was intact.) If you want to use grommets and don’t already have some, they do come in bigger sizes.

I intended to use a portrait orientation so that’s why the labels are attached the way they are. (Be careful not to stick the first label too close to the edge. I did and had to move the whole first row, which doesn’t improve their stickiness.) Once I was done with the labels and the safety pins, I started looking for a notebook and realized it would be nicer if the notebook was set up like an easel. (I actually have a notebook that stands up — the cover is hinged horizontally and it stands on the edge of the cover with the spine as another leg. But the rings are too big for my grommets.) Turning a standard binder sideways will work — you just need to tether the covers together about 6-8″ apart so it will stand up without collapsing.

Because of the way I stitch (lots of parking and no leaving vertical gaps) I often have 2 or 3 lengths of a symbol, so I need someplace to store these as well as a threaded needle. I guess if I really had a LOT of needles I could just put them all in the needle book, but what I have been doing is storing all the lengths on a bobbin, and only leaving one threaded into a needle. I thought I would use safety pins to wrap the extra lengths of floss so I bought a box of quilter’s basting pins. This turned out not to work very well. For one thing, they’re too crowded. It’s awkward to wrap floss onto the safety pins when they’re so close together, and spacing them farther apart didn’t really help. It’s just difficult to wrap floss around something that’s fastened down. And the pins are really too short. It’s a lot of wrapping.

This also suggests that wrapping the floss around a threaded needle may not really be that great an idea. My experience with having a lot of colors parked is that while the floss looks like it’s in a terrible snarl, most of the time I can pull the strand I need free without any problems.

My next idea was attach bobbins to the felt. I sewed 4 bobbins to another sheet to play around with but this seems very awkward too. (And the sewing would be a whole separate issue, but one I don’t need to solve, now.)

I am currently playing around with attaching bobbins with velcro. If you put the hook side on the back of a plastic bobbin, it will stick to the felt. (It probably needs to be a plastic bobbin or a thick cardboard bobbin so it doesn’t get bendy from being pulled off.) Unfortunately, with this felt at least, only a few times of pulling the velcro away creates a long tail of loose felt fibers. It looks like a better approach is to put the hook side on the felt, and the soft side on the back of a bobbin. The velcro sticks well to the felt and to the bobbin, but the bobbin can be pulled off easily (I’m using half of a 1/2″ dot). I could use my existing bobbins which already have the labels on them. The velcro needs to be near the top of the bobbin so that the floss, wrapped at the bottom of the bobbin, doesn’t risk getting caught on the hook side of the velcro.

Or I could just get a LOT more needles to allow for having 2 or 3 threaded per symbol. Right now that sounds the simplest.

Last idea: you know the tabbed dividers you can get for 3-ring binders? You can get just the tabs, with peel-off sticky backs, to stick to anything you like. Those would be nice (I think) to label the range of numbers on a page so you can flip directly to the page you need.

Incidentally, I did look a long time at the foam sheets — some people have commented they stick their needles into labeled foam sheets. It seems like that wouldn’t work unless you got them ALL onto one page, and that seems like it would be awfully crowded. But clearly, it works for some people, and I haven’t tried it (yet).

You are currently browsing the Scarlet Quince Ramblings blog archives for April, 2012.

I have been cross stitching for more years than I care to remember and never found a pattern that was detailed (and complicated) enough to make me happy. I have completed more than half of Joseph Nigg's La Corbeille des Fleurs and it is just gorgeous. Using the blended colors makes it so detailed it does look like an oil painting. Sure is much more than a craft store has to offer. Thank you for such a beautiful pattern.