I received a suggestion yesterday that we add a pattern of Edvard Munch’s The Scream. It has been suggested many times before and I wish we could use it. I’m sure it would be popular, particularly in this day and age when there seem to be so many good reasons to scream. But it is still under copyright and we inquired several years ago and could not get permission to use it. I explained this and the lady responded that she knew of at least two other cross stitch sites that have it. I’ve seen them too, but they are using the art illegally. I don’t know that 100% for sure, but I like to think our patterns are at least as good as anyone else’s, if not better, so it’s not likely that these other designers got permission to use the work while we were denied it. Maybe they negotiated the exclusive use of the work, but generally when someone has an exclusive, the rights holder says so. So it’s my belief that these designers are either ignorant of copyright or just don’t care. They’re small and apparently not worth the rights holders going after them. It’s really frustrating but much as I would like to offer a pattern that others have, it would be illegal. And wrong. I don’t think Munch (or his estate) would be injured by a high-quality cross stitch pattern, but it’s still their right to deny the use for that purpose.

We have also been denied the right to use the work of Pablo Picasso, Rene Magritte, Henri Matisse, Andrew Wyeth, Jackson Pollock, Marc Chagall, Georgia O’Keeffe, and Salvador Dali. If you see cross stitch patterns based on work by these artists, they are not being used with permission and the designers are not paying royalties. Then there are the artists (actually their representatives) who don’t bother to respond. These include Jack Vettriano, M. C. Escher, Thomas Kinkade, and Peter Max. Some of these may still be possible if I’m persistant enough, although I read somewhere that Peter Max made a decision several years ago not to license his work for anything anymore.

I often tell people that licensing art is a time-consuming process. Some of that is negotiating terms but most of it involves requesting permission, waiting, following up, waiting …

The good news is that Edvard Munch’s work will become public domain January 1, 2015. So we’ll be all over The Scream then!

You are currently browsing the Scarlet Quince Ramblings blog archives for June, 2013.

I have just ordered and received (within 1 week) my first Scarlet Quince pattern. Superb and speedy service. The pattern is magnificently printed and bound. I am anticipating a long happy relationship with my canvas! 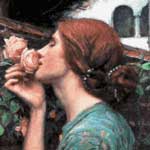