Here’s an idea for speeding your stitching in a couple of different ways. (It isn’t my idea, by the way — it was sent to me by a very clever person.) It relies on having enough needles so that you never unthread a needle. I do this more or less, by wrapping the floss on a needle around the appropriate bobbin, and leaving it there until the floss is used up OR I am done with that symbol for the foreseeable future, at which time I unthread the needle and wrap the floss onto the bobbin and file it in my bobbin box.

An even better way is to make a needle book out of felt sheets! Not a little bitty needle book like you might have for sewing needles. Buy several sheets of felt. They are approximately 9 x 12 inches. You can use safety pins to fasten them into a book, or use 1/4″ metal grommets and binder rings (or just put them in a 3-ring binder). Then, using our floss labels, stick the labels to the floss sheets in rows in numerical order. Leave the length of a needle between the rows (she says she discovered the needles should be stuck in from top to bottom, i.e. pointing down). It looks like this: 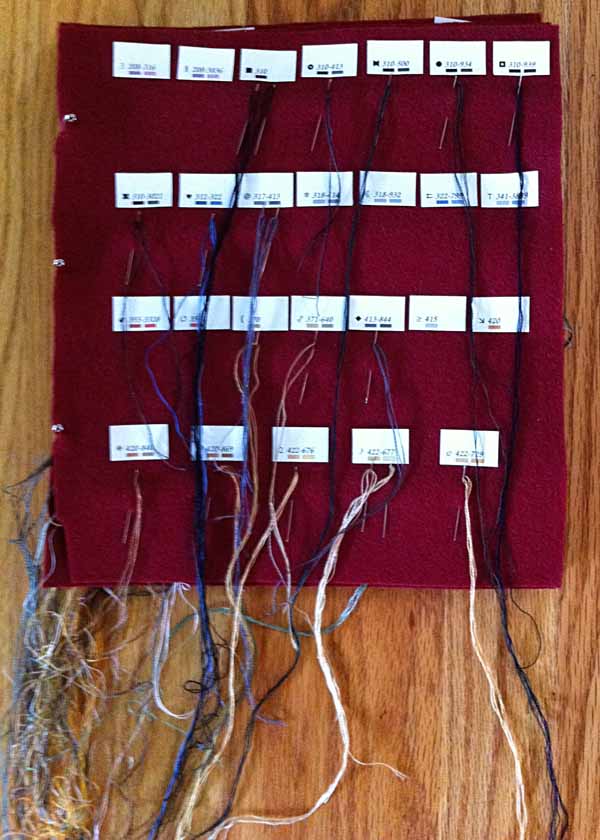 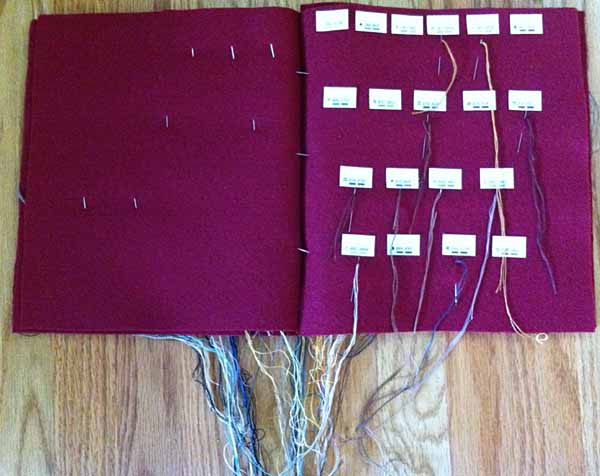 She says “I am constantly combing the threads down but they still get all tangled together. That’s OK though. I can still pull out the color I need.”

If you put the needles in horizontally, you could get a lot more per page (my needles are only a little longer than the floss labels are wide). I don’t know if they would tend to come out, but you could also wrap the floss tail around the needle, like this: 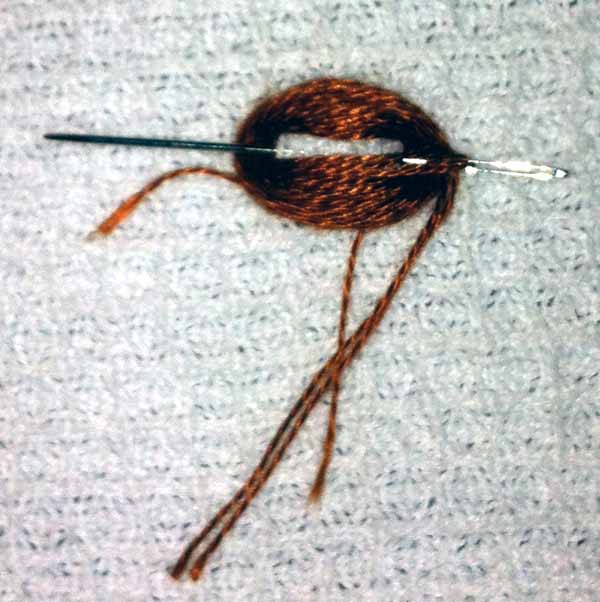 This is on a dishtowel — I don’t have any felt right now. This should keep the needle from coming out accidentally and it would solve most of the tangled tail problems. It does take extra time to wrap the floss on, but surprisingly, you don’t have to UNwrap it. Just pull the needle through. Even with a long piece like this, it comes easily!

You do need a needle for EVERY symbol, so you don’t want to be buying your needles 6 at a time. You need bulk needles and here are a few places you can get them:

or search for “bulk tapestry needles”, “1000 needles” etc. but be aware that some sellers of needles in bulk don’t sell to consumers. (I got Bohin needles from Anita Little Stitches and they are really nice needles. I mean they’re really nice. Too good for me — I keep dropping them and rolling my chair over them.) I believe John James are also good needles. I have no experience with Colonial needles. All the above vendors ship worldwide. Maybe sometime I’ll get a bunch of different needles and see how they stack up!

You are currently browsing the Scarlet Quince Ramblings blog archives for March, 2012.

I am currently working on Jacob and Rachael, the richness of the figures and background is breath taking, worth my time and effort.