I just finished a tutorial on gridding, in which I mentioned Easy-Count Guideline. I had more to say about this but didn’t have room in the tutorial.

(If you’re coming late to the party, Easy-Count Guideline is a red plastic monofilament “thread” which comes on a spool in a little enclosed drum. The thread feeds out of a little hole in the drum.) 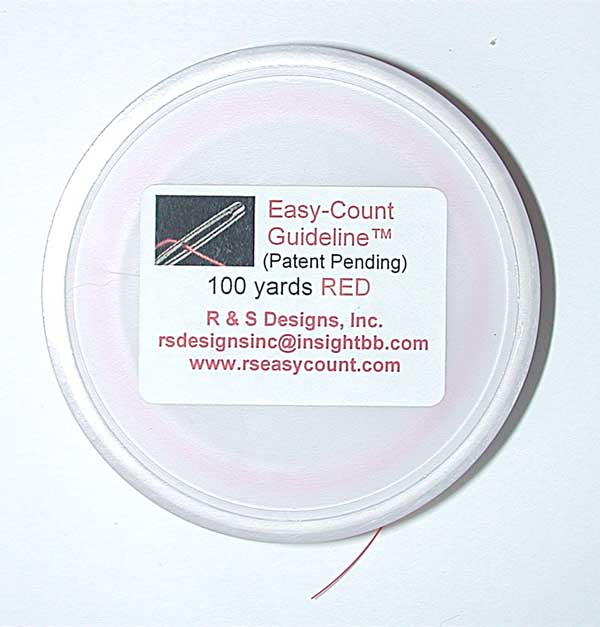 It says “Patent Pending”. I’m not sure what they’re patenting here. They didn’t invent monofilament line. True, the little box is pretty cool — if you’ve ever used nylon “invisible” thread, you know that as soon as you loosen the end, it starts unspooling itself like crazy, and that’s not an issue with this packaging. If you read their web site, you would think that they invented gridding. Almost none of the benefits they list are unique to Easy-Count Guideline. The only advantage it has over anything else you might use to grid is that it is really, really strong. You can’t pierce it with a needle, so you can leave it in until you’re finished stitching … completely finished. I feel fairly confident in saying that you won’t be able to pull this stuff hard enough to break it. I am not as confident that if you leave it under 500 stitches that you will be strong enough to pull it out. In the limited testing I’ve done, you have to pull hard to get it moving but it is slippery so once started it comes out fairly easily. But I don’t trust that I would be able to get it out from under a whole row of stitches, so I’m basically removing it as I go. I am also stitching on 22-count Hardanger cloth currently, and the Guideline takes up a lot of room. If I stitch over it, it raises the stitches a little, and in these cramped quarters it’s tricky getting past it.

I wondered why you wouldn’t just use some other, less expensive, plastic thread, maybe something that comes in multiple colors (I am hugely sold on color gridding). I went to JoAnn and was surprised to find that aside from the “invisible” nylon thread (which is unsuitable for gridding for obvious reasons) there is actually no non-spun sewing thread. I did get a spool of Sulky Sliver (also something I read about in the forums) but I couldn’t find it locally. It is a “thin, flat ribbon-like polyester film that is metalized with aluminum to make it brilliantly reflective”, according to Sulky. It comes in lots of colors and it’s probably not possible to pierce it with a tapestry needle, so you could stitch over it, and it’s about $1.88 per 100 yards. It’s pretty strong, but not as strong as Easy-Count Guideline. MRA was able to break a length of it, which he couldn’t do with the Guideline. Would it break being pulled out from under a lot of stitching? Let me know if you try it — I’m not going to. I do like it for the page boundaries with my color gridding — the metallic thread really stands out and since it’s more plastic than metallic, it’s easy to work with.

But back to Easy-Count Guideline — how is it any different from fishing line? I went to Academy to find out. 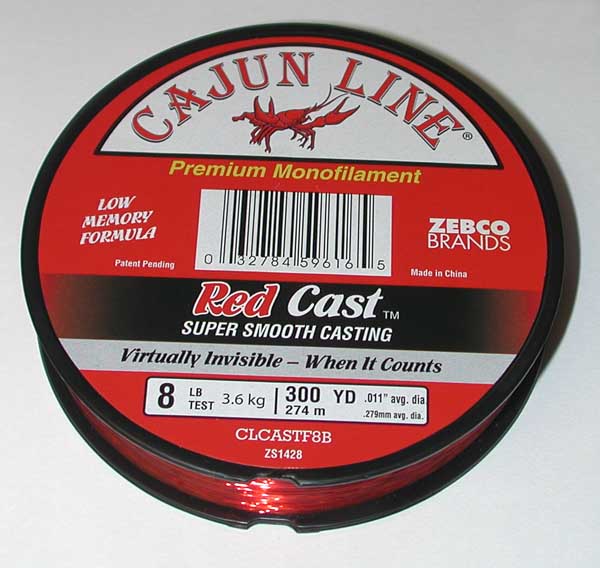 It turns out that a lot of fishing line is colorless, but it does come in red and green. I got red, 8-pound line, which was the lightest they had in stock. It was $1.50 per 100 yards. (Look for monofilament line, not “braided”.) It is a transparent red, while the Easy-Count Guideline is more opaque, but it’s hard to see a difference on fabric.

The top one is Guideline; the lower one is fishing line. It’s pretty hard to see any difference. The threads going vertically are sewing thread, and this is 22-count Hardanger cloth. The Guideline might be a teeny bit softer but they both tend to kink at the end of stitches. Fishing line comes in lighter weights and 6- or 4-pound might be better. The fishing line was taped to the spool and it does start unspooling the second the tape is off, whereas Guideline has that coolio box … but I put the fishing line inside a zip-loc bag and poked the end through the bag, and now it can just live in there and do its thing. (If I wanted to futz, I could probably make a sleeve for the fishing line like the Guideline has.) The Guideline also has extensive instructions — seriously. And not altogether helpful instructions, in my opinion. They assume your pattern will not have a 10 x 10 grid and want you grid from the center out and then mark the pattern to match your fabric. Obviously, you need to make the fabric grid match your pattern grid, and the center point is quite possibly not at the intersection of two bold lines. Probably the key point is to take long stitches since this material strains the fabric. They want you to have 6 stitch lengths on top and 4 underneath so you have a series of broken boxes to match the grid in the pattern, like this:

I could not find Easy-Count Guideline at JoAnn or Michael’s, but a shop specializing in needlework might have it, and it’s easily found online. Is the nice packaging worth $7.50? That’s what it boils down to, that and the fact that anyplace that sells sporting goods will have fishing line.

One last note from a reader, beading supply stores sell a product similar to Guideline in a variety of colors for a much lower price. It’s called nylon beading cord. It may not be available at general craft stores but you can easily find it online.

You are currently browsing the Scarlet Quince Ramblings blog archives for October, 2011.

The patterns have just arrived and I am absolutely delighted - they are wonderful and I am really impressed with how you produce them. 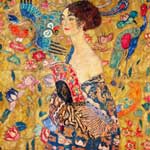