I’m working on Blue Peacock – Jesse Arms Botke, and in most places the colors are mixed to very mixed. Since I’m working on 22 count aida, my size 24 needles are a little too big, and that’s what I have the most of. I bought a new packet of 26s when I started this, and have several times raided the various places I put needles, even coming up with an old packet of 28s. I don’t know why I have them because I don’t like them much — besides not having a very smooth finish, they bend easily and I have somehow broken the eye in a couple of them. So to make a long story short, I have been chronically short of needles on this project, partly because I sometimes have 2 or 3 needles going with the same color in different spots. I went to Michael’s recently to get more needles and they were out of 26s, of course. The JoAnn that was near us has moved, and while they didn’t move to Timbuktoo, they’re probably 3 times as far away as they used to be. It’s probably only a couple of miles further (there’s an algebra problem for you) but the psychological distance is much greater.

I’ve been thinking about getting some needles in bulk but the only sources I knew of had packages of 1000 needles and I wasn’t quite ready for that. But earlier this week I settled down to solve the problem of needles and I found a place that has bulk needles in packages of 25 or 50. It’s Anita’s Little Stitches. She has John James and Bohin needles. I’d never heard of Bohin (they’re French) but she says that they’re the best needles on the market so I ordered 50 of those. I also wanted to try Thread Heaven so I added that. This didn’t get me to the minimum order of $15 so after wasting time admiring the scissors I included a needle minder, which I’ve never tried either. When she emailed me that my order would ship the next day, I couldn’t help replying to say how excited I was! Then I thought, how pathetic to be excited about needles, but I’m sure she understands. 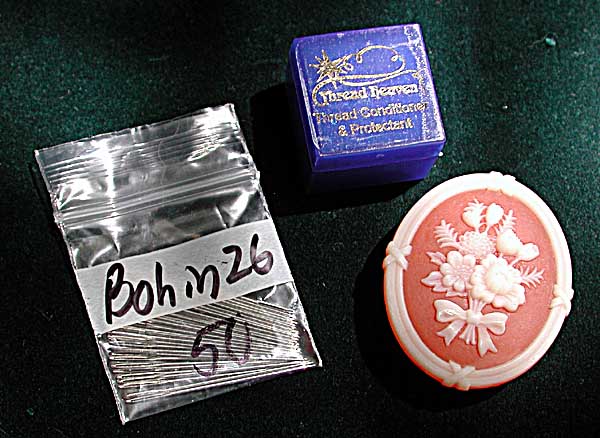 I’ll tell you more about the needles after I have more experience with them. I’ve only used one as yet and now I don’t know which one it is. The most interesting thing so far about having lots of needles is the effect it has had on my stitching. I no longer hesitate before starting a new color. I don’t spend time checking whether I may get to a stitch with this color where I will need to put in stitches of another color above it before I can do that stitch. When you’re short of needles, you spend a lot of time trying not to run out. I was running out a lot and robbing needles from parked threads, which obviates part of the point of parking (not having to rethread needles). It makes my stitching, even in the confetti areas, much faster and much more fun.

I like the needle minder too. I usually weave the needles I’m not using into the edge of my fabric but it was getting pretty dilapidated. I then pinned a scrap of extra fabric to the edge and put my spare needles into it. But the needle minder is really fast to use. (It’s in two pieces, with a magnet glued to the pretty front and a separate magnet. You put the front on the front of the fabric and the loose magnet on the back and that holds it tight to the fabric.) You just drop your needles on it and they stay put even when you flip the frame over. I don’t think it will hold 50 needles but when you have one to a few needles not in use it works really well.

I haven’t tried the Thread Heaven yet. It’s gummier than I expected but I’ll let you know what I think of it too.

One night recently, MRA went out to see if the wild cats had food (we leave food for the feral cats in the garage, and have 3 or 4 regulars), and there was a very small skunk eating the cat food! Very cute.

A couple of nights later, the little skunk was back, and this time he had a friend with him. 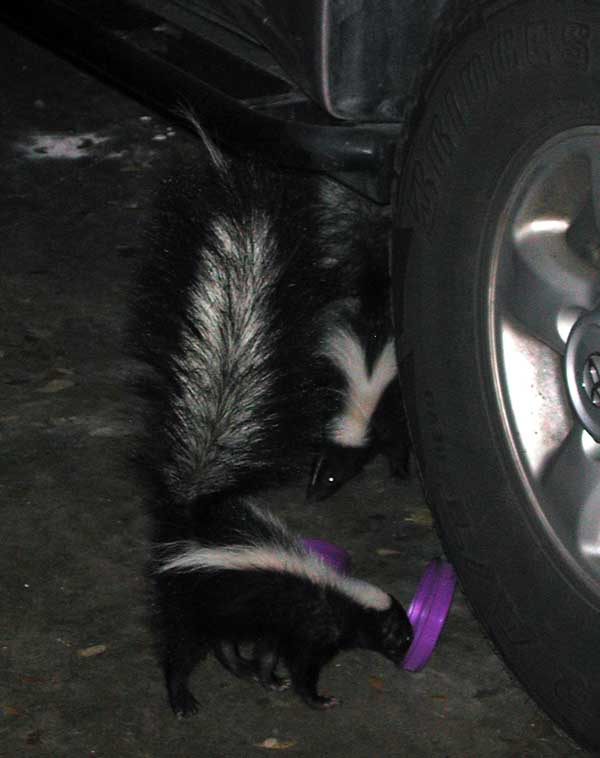 I was nervous taking this picture because you never know what might set a skunk off, but it didn’t faze them. Sandy, one of the not-very wild cats, was hanging around, and he didn’t seem to mind the skunks and they didn’t mind him. Fortunately, the skunks have not continued to multiply.

You are currently browsing the Scarlet Quince Ramblings blog archives for August, 2010.

I am sending you my 2nd progress picture of The Lady and the Unicorn. I cannot tell you how much I am enjoying stitching this project. It is so beautiful and your pattern has been absolutely true to the picture.