No, not from my redwork alphabet … I wanted to do something special for the friend who kept the kittens most of the time that we were taming them and allowed me to show up at her house daily with little warning to visit them. I had this idea rattling around in my head — her name is 8 letters long, but only 6 letters are unique, and they can be arranged on a cube so that you can spell her name by turning the cube, so I decided to make her a name cube. (I know, weird. I should probably ease up on the word puzzles.) 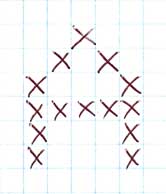 I decided to do it in harganger. I have stitched hardanger before, following a pattern in a leafletI had, but I have never tried to design hardanger. It’s kind of mind-blowing because the basic units (Kloster blocks) are 5 stitches wide with each stitch covering 4 threads (which is 5 holes), and you arrange them corner to corner so you get squares. The pattern I worked before had each stitch laboriously drawn on graph paper showing exactly where each thread goes. I tried to do that but kept messing up. Finally I decided it would be better not to think too hard about it. I started by designing simple letters in a grid 6 x 5. Here’s my A. 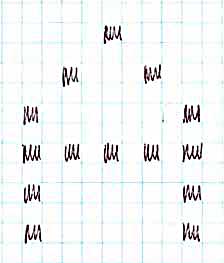 The “pixels” in the letters are going to be the open places after cutting threads, so I moved them apart to allow for the stitching around them: 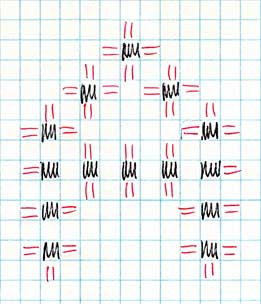 Then I sketched in my Kloster blocks around them. (Represented by the red lines — just pretend there are 5 instead of 2.) 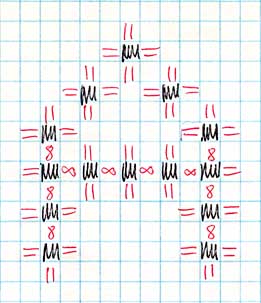 The remaining spaces between the places that will be cut out have to be needleweaving, indicated by 8′s. If you haven’t done hardanger, trust me: they just do. 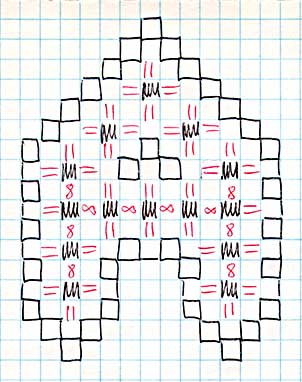 I decided I wanted a little more embellishment and was thinking of putting another row of kloster blocks all around, but decided that would look stupid and might not even work. Instead, I substituted a border of double wave stitch. This also made the letters bigger since so far the design is really pretty small. 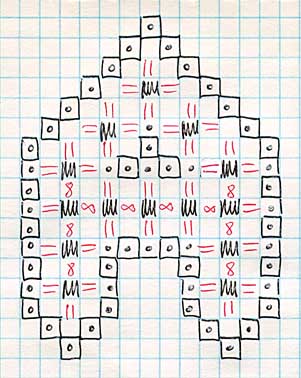 I planned to do this on some of the Ariosa Fine that is left from my redwork alphabet, since it’s 22-count. (My hardanger booklets recommend 22-count fabric with #5 and #8 pearl cotton.) The thing I forgot, though, is that it has a rayon content, which means that the cut ends get kind of fuzzy. 100% cotton or linen would be much better. I played around a bit with colors for the stitching but there aren’t too many colors that come in both sizes of thread, so I settled on red for the Kloster blocks (#5) and needleweaving (#8), and gold (#5) for the outline. Once I had made that decision, I thought gold beads would be a nice addition. I ad libbed them but here is my basic approach to the bead placement (dots on the diagram). 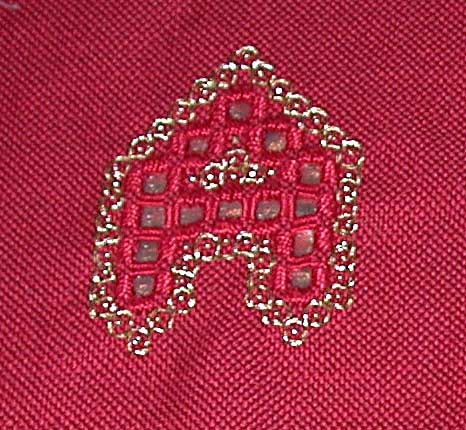 Here is the finished letter A. I backed it with gold tissue lame. (I took a finished letter to the fabric store and tried different backings. I had thought about black, but liked this better.) 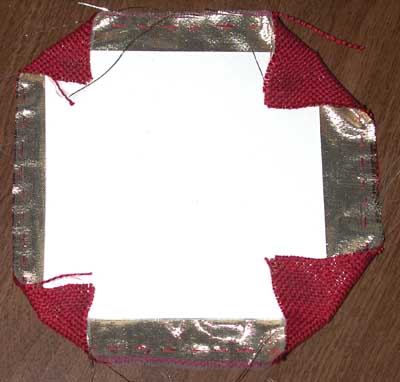 MRA kindly cut squares from mat board which is very hard and stiff and he got them all the same size, which I wouldn’t probably have managed. I glued the letters to the squares and also turned the corners in and glued them. I bought some special fabric glue while I was buying fabric — it was supposed to dry clear — alas, not so. (The red square isn’t centered on the mat board because despite much counting and measuring, the letters never came out really centered in the fabric squares I had marked.)
Next I stitched the squares together into an unfolded cube. To finish the cube, I had to fold two faces together at a time and slipstitch from the outside. To keep the fabric taut while I was doing this, I first basted opposite “seam allowances” together on the inside, making long stitches across the back of each square. 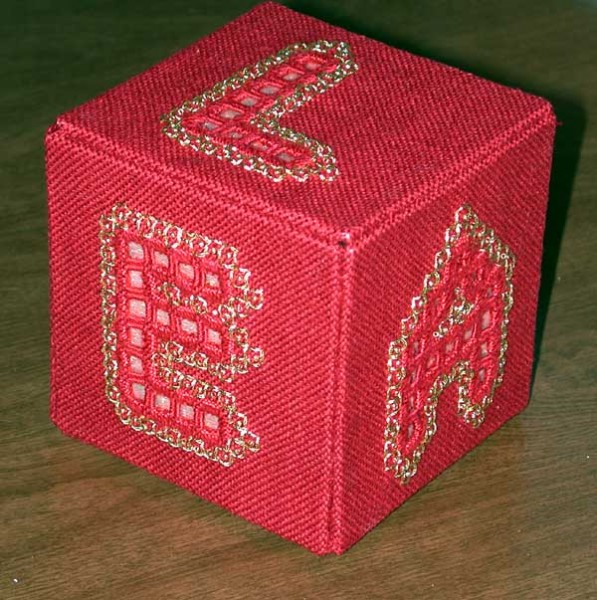 Here’s the finished cube. I was very pleased with it although I could do a better job if I were to make another one, which I have no plans to do. My friend would probably rather that I had taken her to lunch, but I had fun doing it.

The kittens have been growing practically before our eyes, and getting tamer and friendlier. Pearl learned to purr first, then Socks (who was initially surprised by the strange sound) caught on. 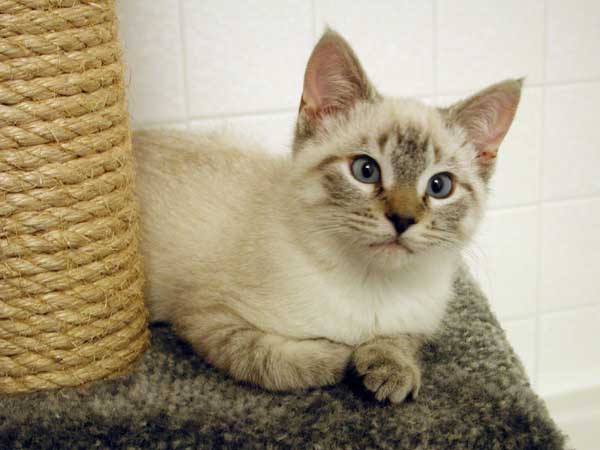 We set up a “tiger pole” for them and they learned to climb it (and more importantly, how to get down another way than falling off) and they have gotten lots of exercise racing up and down. They both learned to enjoy being petted, picked up, and snuggled, although Socks still is a bit skittish when he sees someone reaching for him. Once you have your hands on him, he starts purring immediately. 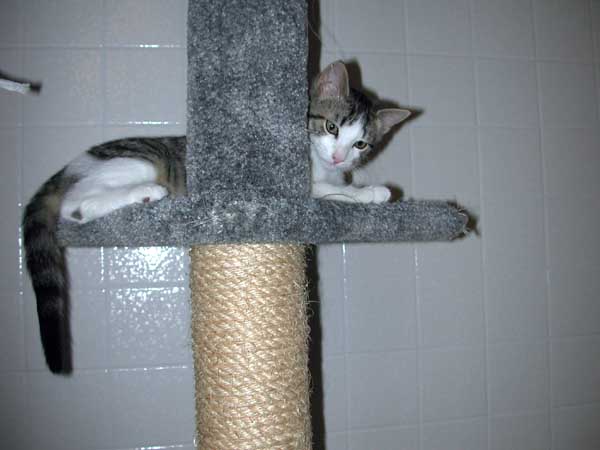 Pearl is really 100% tame. She loves to be the center of attention and if anyone tries to play just with Socks, or pat him, she has to butt in. He’s less outgoing, or less aggressive, and so we reluctantly decided they would do better if they went to different homes. They are adorable snuggling each other and playing together but he has visibly hurt feelings when Pearl is getting more attention than he is. 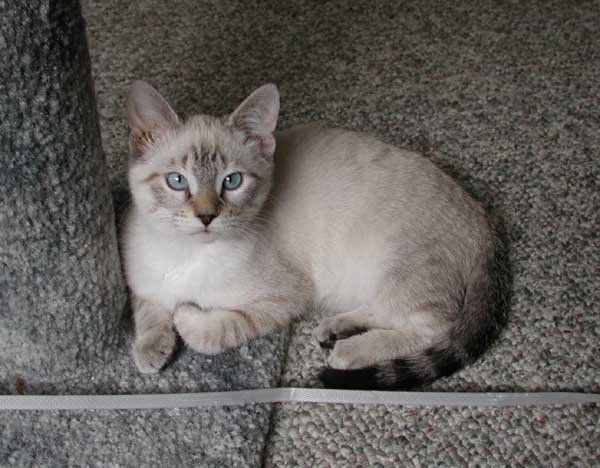 They came here about a week ago — it was just too awkward scheduling prospective “parents” to meet them at someone else’s house. Lucky has not been happy — he skulks outside the door of the room where we put them, and we had to put a mat in front of the door to keep him from sniffing and reaching under the door, and then put a weight against the mat so he couldn’t roll it away. When I catch him there, he trots away very quickly with sort of a “I certainly have no interest in whatever is going on in there” attitude. I have been lavishing lots of extra attention on him to keep him from feeling too jealous. Topsy and Jemima have not been interested in the kittens at all.

One of the main features of our guest room, as far as the kittens are concerned, is the disassembled bed. The mattress and box spring are leaning against the wall, long side vertical. They climbed up there almost immediately. 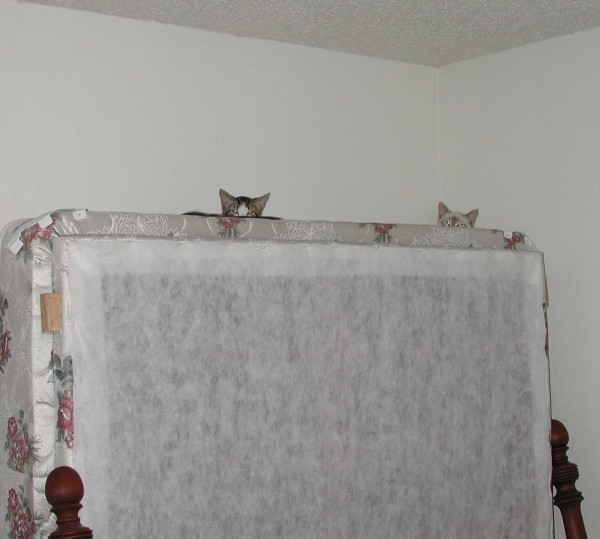 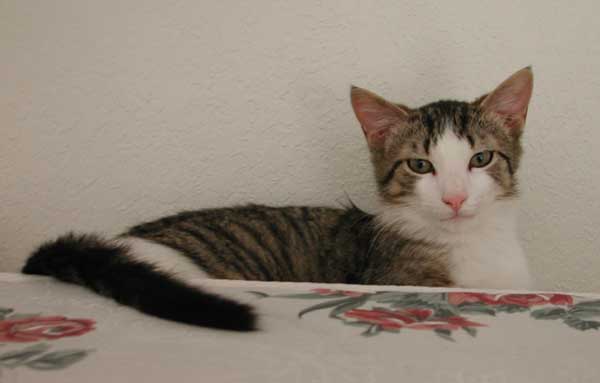 After checking on them several times, and finding them still on top of the mattress, I began to wonder if they could get down. I tried to entice them down and found that they really had no idea how to climb down. So I set up a ramp from the top of the mattress to the dresser. Pearl tried it immediately but it was too steep. I added a few books and that made it manageable — still a little slippery but OK. She wouldn’t try it again until she saw Socks navigate it, though. 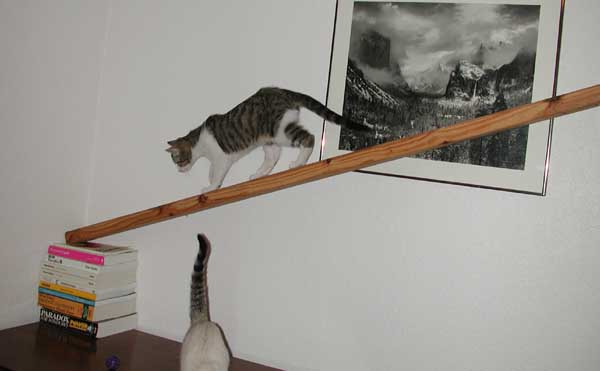 That has been one of the most fun aspects of this whole project — seeing the way they learn from each other. Our cats do that too, occasionally, but these guys are at an age where they’re learning something new every day, or every hour. We brought in a “cat dancer” — little bits of cardboard tied to the end of a long flexible wire — and Socks loved it instantly. He chased it and gave crazy leaps after it, but Pearl was initially baffled by its unpredictable movements. She watched him play with it for about a day and then she had it figured out.

We have found good owners for them, I think — people who really want them, will keep them indoors, see that they get any medical attention they need (including spaying/neutering), and where they will each be the only pet. Socks went to his new home on Saturday and Pearl this morning. I so wish we could have kept them but it would not have been possible to give each of 5 cats the kind of attention they deserve, even if Lucky would have stood for it. We will miss them. We’ve been spending at least an hour a day with them for the past 5 weeks (and much more than that since they’ve been here). I have other uses for that time, but it’s hard to see them go.

Finally I have added the last few pictures I’ve received to the gallery. There weren’t as many waiting to go in as I thought, but some have been sitting in my inbox for quite a while. In retrospect, it’s a little hard to explain why this seemed like such an ordeal — it isn’t difficult and it doesn’t usually take very long. But December is cedar pollen time here, and it makes me tired, tired, tired to death. So much so that doing a half-hour task (that can be done sitting down) just seems impossible. I won’t go on about it because there’s little as boring as someone whining about their allergies; just wanted to let people who wondered what happened to their pictures know that I’m BACK!

Later: Well, I’m not finished after all. I THOUGHT there were more somewhere.

Much later: I added 6 more pictures to the gallery and was about to write that I am really caught up, when I realized that another one came in this morning! Now I’ve added it too, and I think I am really, really caught up. I use my email inbox like a to-do list which makes it a little hard to see at a glance what’s what. But I learned a long time ago if I put things that needed some sort of attention into a different folder (for example, I had one for suggestions) they would just languish there forever.

You are currently browsing the Scarlet Quince Ramblings blog archives for January, 2009.

Now that my wife has had the time to work with [SQ Stitch] she is absolutely delighted and cannot believe that it was free. She says her work rate, with the help of the software, has dramatically improved as has the accuracy of her stitching. The software has so many useful options to help the user and is very user friendly.....even l can understand it!