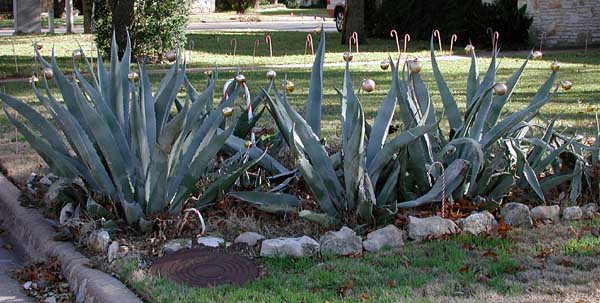 There aren’t many conifers around but people decorate what they have! 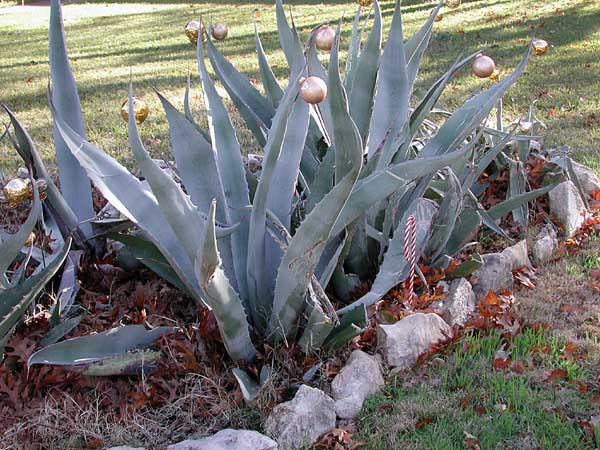 I love the decorated agaves! 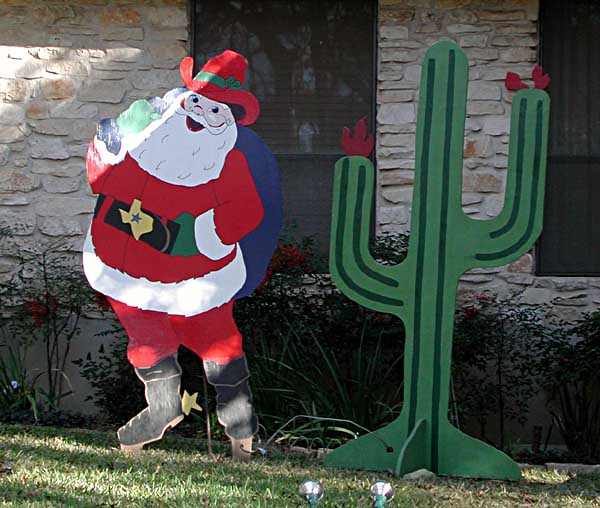 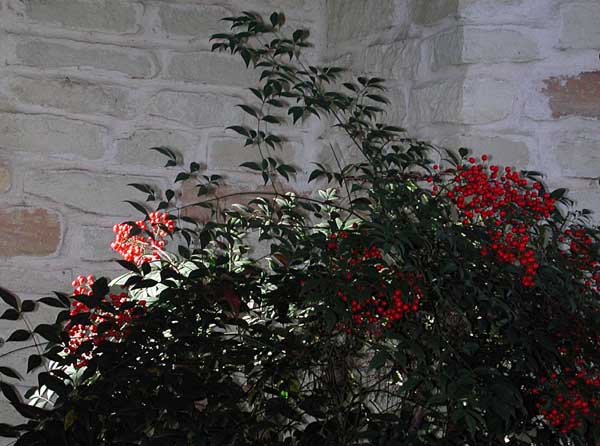 The Nandina is Christmasy! Merry Christmas, everyone.

Last year we got 3 heating pads for the cats. These are special pads designed for animals that get warm only when there is weight on them, and just warm, not hot. Although we have 3 cats, I didn’t think we really needed 3 pads. I was wrong. Apparently, it is very, very cold. They like the heat from the lamp, too. 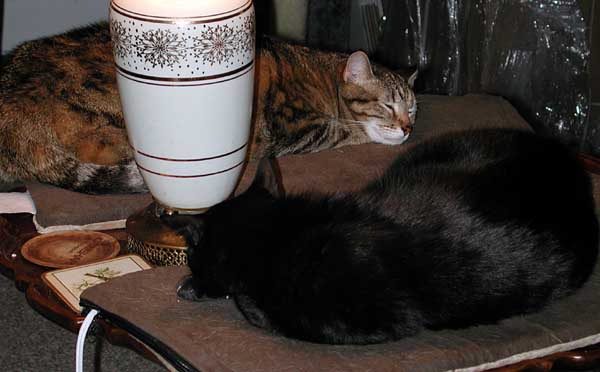 This is only a 2-cat table so Jemima has her own place. It’s best this way because she can’t really be close to Topsy or Lucky without taking a poke at them.

Topsy is a good sleeper. 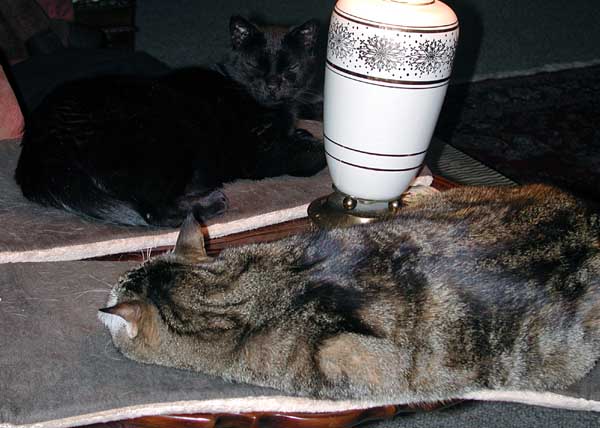 I just finished W and it’s time for a picture before I scroll up to start THE LAST ROW! 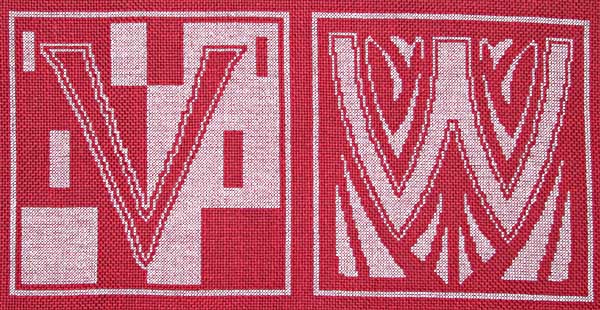 I added two columns to the solid square in the lower left corner of the V. I originally made it 2 rows taller than charted because it was clearly not the same size as the empty square on the right. I didn’t notice how unsquare that made it look until I had taken a picture.

I love this W! But it too had problems (minor ones). The ornaments around the bottom were not symmetric and it was really obvious. I only needed to add 2 stitches that weren’t charted, but I wonder why this keeps happening? Is this some kind of “the gods would be jealous of perfection” schtick? Carelessness? If you don’t want it to be symmetric then make the two sides different, don’t make them 99% the same. At least that’s my view. Fortunately I don’t feel constrained to stitch it as it’s charted but all this checking to see if it’s going to be symmetric or not is wearying.

I started the ornament in the lower left corner last night. It’s basically a circle made of 4 swirls, and the swirls are not all alike. I’m still stitching the border but I will have to look at this more to see if I can stand to stitch it this way. They’re hard to compare since they’re all rotated, i.e. there’s the top one, then the one on the right is rotated 90 degrees from the top one, the bottom one is 180 degrees from the top, etc. If I had charted this you can bet I would have done one and then copied it 3 times, but maybe somehow it doesn’t fit that way.

We finally got the potstickers made and they were delicious as always. (If you don’t know what potstickers are, they’re Chinese dumplings filled with cabbage and pork, then fried on the bottom and steamed on top. Sometimes Chinese restaurants have them on the menu but usually you have to find a dim sum place.) These are the active ingredients: 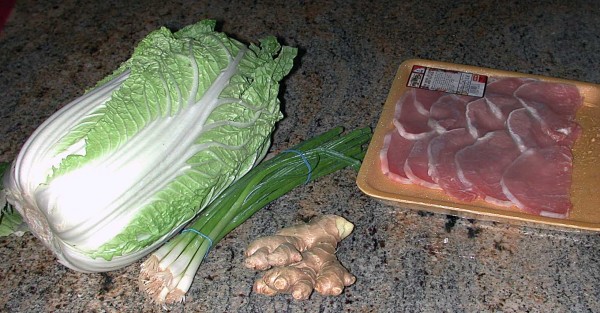 I’m always surprised when they turn out well because we don’t follow the recipe much at all (we open the “The Key to Chinese” Cooking by Irene Kuo to the relevant page to remind us of the ingredients, and then the negotiation begins: “I’m going to put in 4 green onions”. “It only calls for 1! Let’s have 3.”). We use napa instead of bok choy — I think the first time it was a mistake, or maybe the store didn’t have bok choy — but we’ve stuck with it because we like napa. It calls for a small amount of ginger but we used almost that whole piece and it was just nicely gingery.

Nowadays we make two batches because ONE of us doesn’t eat meat and the OTHER doesn’t eat veggie burger stuff. So one batch is made with pork and one with Morningstar Griller Crumbles (rank). MRA makes the filling, which involves a lot of food processor work, and I make the dough. Making two versions of things isn’t a lot more work but it does make a lot more dishes. At least the napa can all macerate together: 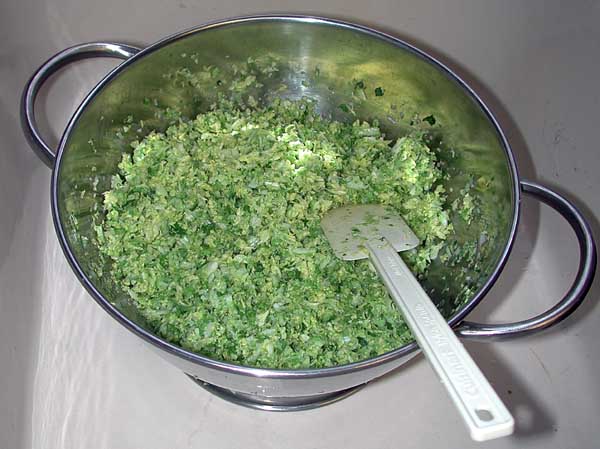 Meanwhile I am making a hot water dough (just hot water and flour). We need 64 4″ circles so the first step is rolling the dough into a long snake and dividing it in half. Then each snake is rolled thinner and longer, divided into 4 pieces and then marked into 32 sections. I cut the dough apart, roll it into balls, and mash the balls into cookies before rolling them out. This was my mother’s rolling pin and it’s so nice to use. 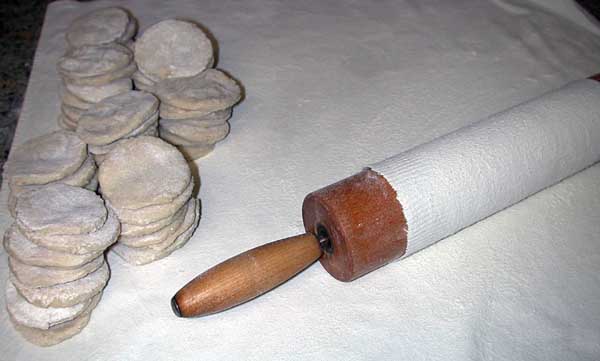 After the napa macerates (you mix in a little salt and let it stand for 10 minutes, after which a lot of juice can be squeezed out) it gets mixed with the previously chopped pork, ginger root, and green onion and then bits of other things are mixed in. There’s a little corn starch mixed with water, sesame oil, a pinch of sugar, and so on.

As the dough circles are rolled out, I put them under a damp paper towel to keep them from drying out. Once they’re all rolled out, one side is pleated. This makes the dough into a shallow cup shape (and also makes the potstickers cute when they’re done). 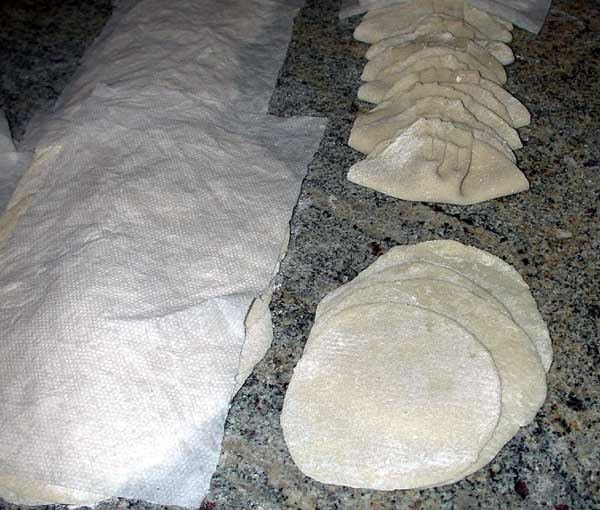 With any luck the filling and the pleating are done about the same time. MRA is in charge of dividing the filling into even portions and allocating it to the wrappers. Since they vary somewhat in size there’s always some redistribution. Meanwhile I’m getting the floury paste off my hands. 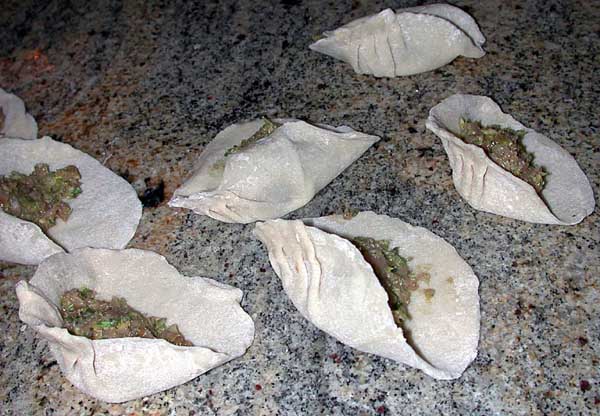 To close them, you pinch the edges together, then holding the pinched edge, mash it down flat so it has a bottom, and bend the corners around to make a crescent. 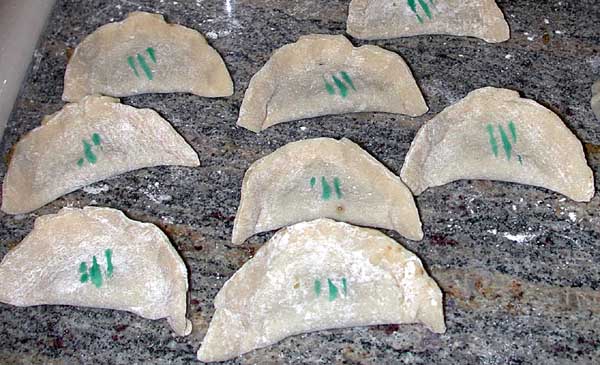 I add a little water to a drop of food coloring and mark the veggie ones. It took us an hour and 45 minutes to get to this point. Cooking is about 10 more minutes.

To cook, you first fry them briefly, then pour on boiling water, cover and steam for several minutes. Then they are uncovered and the water is cooked off. )Oh, and do yourself a favor and use a non-stick pan. The name wasn’t chosen at random.) It makes an awful mess of the cooktop. 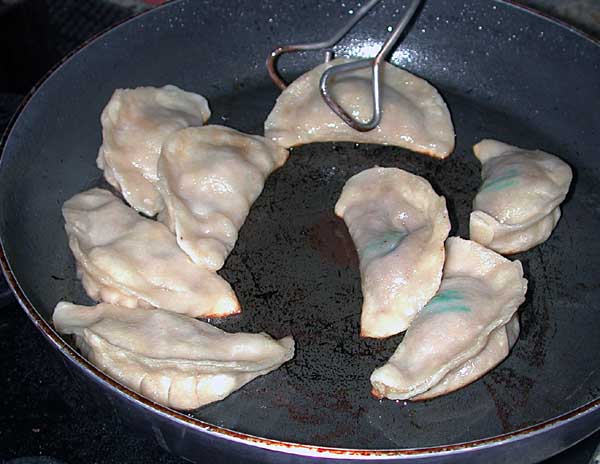 At this point the top is soft and tender and the bottom is crisp. I like them a red-brown, just short of being burned (they’re not black although the picture makes them look that way). 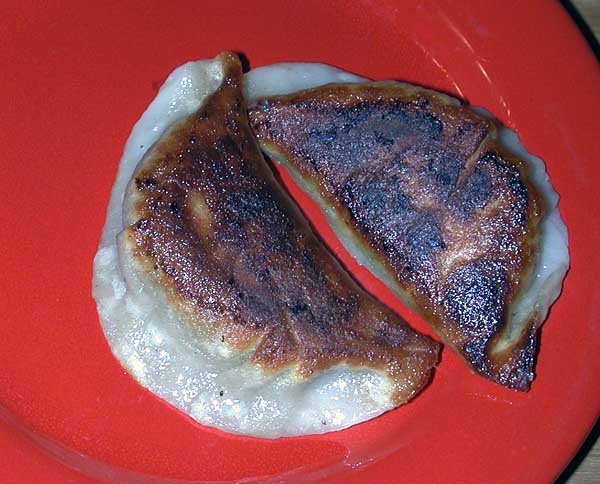 Delicious! They aren’t very good reheated — the dough gets tough and the bottom is never crisp — so instead we cook just what we’re going to eat and freeze the rest. If you put them on a sheet of waxed paper in the freezer, not touching, and freeze them that way, once they’re frozen you can put them into bags and take out whatever you want the next time. You don’t need to defrost them before cooking — just start them frozen.

As a nod to the season, I also made a sweet potato pie, though not the same day. 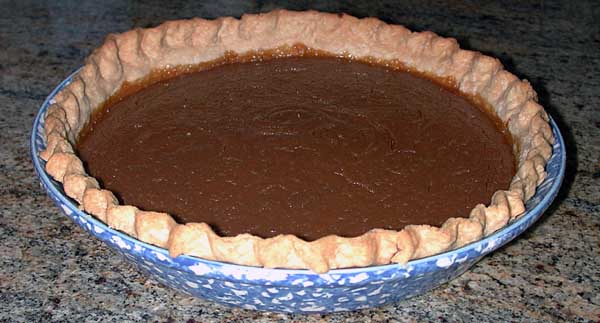 You are currently browsing the Scarlet Quince Ramblings blog archives for December, 2009.

Thanks so much for hours of stitching with such beautiful results. I love seeing the picture come alive as I stitch.