I finished stitching my red alphabet about 5 years ago, and almost that long ago I bought the supplies for finishing it as a wall hanging, but only recently actually finished it. It came out pretty well. It’s not as flat as it ought to be and I hope some additional pressing will fix that. I had intended to write a tutorial on how to do this (not that the way I did it is the only way) but some things went wrong along the way that I can’t explain. Still, I can give you some pointers. 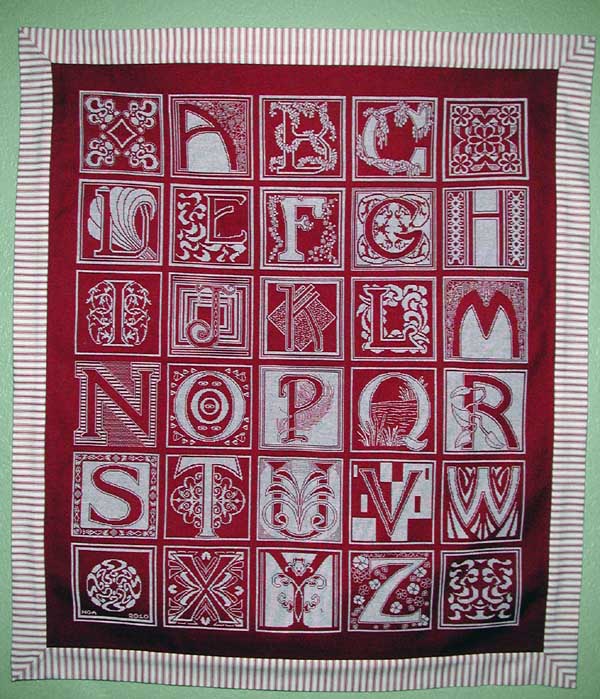 The first thing I did was fuse a sheet of fairly stiff Pellon to the back of the stitching. I had debated about whether I wanted to do this, but reasoned that if I decided it needed to come off, I could get it off again. Now I think that was the right choice because it will keep the stitching from sagging from its own weight. It was too big to block (on anything I had available) so I just went ahead and fused it. It didn’t come out 100% rectangular which made trimming the margins so they were all the same size tricky. I wanted to trim it so there was a 2″ border all the way around but because it was a little distorted in places, I couldn’t just measure 2″ from the edge of the stitching. I had to make marks at various places along the stitching and then draw a line that went through most of them. (I would have liked a larger border but the designer was seriously confused about how big each block would be and once I figured out what the real size would be, there wasn’t as much extra fabric as I had intended.)

In retrospect, I think I should have cut a paper pattern the size of the stitching, pinned it to the front of the fabric, and made sure that the edges and corners of pattern and stitching were aligned with each other, then fused it.

Next, I basted a piece of the backing/frame material (red and white ticking) to the back.

I decided to use 1/2″ seams to make calculating sizes easier. I chose 2″ for the frame width, which means, allowing for seams and the back of the frame, that the pattern pieces for the frame need to be 5″ wide. The frame pieces were shaped like this:

The end points should be right angles. The long side should be the same length as the side of the fabric (edge to edge). I folded the pattern in half to find the center and aligned the center with a line on the fabric. (It would be easier to use plain fabric. If you are stitching a cross-stitched picture, it would look better than patterned fabric anyway.)

To stitch the frame to a side, start 1/2″ away from the edge (or whatever you are using for the seam allowance) and end 1/2″ from the other edge. The seam allowances need to be free to make the miter. Be careful, when attaching an adjacent piece of the frame, not to stitch past the point where the stitching on the first piece ends. The 3 seams at each corner (horizontal, vertical, and diagonal) have to just meet. It’s better to have them not quite meet and fill in the hole by hand than have any of them cross. Only stitch from the corner close to the needlework to 1/2″ away from the point.

Now press the frame away from the stitching. Press under the seam allowances on the back, and fold each frame piece in half and press. For some reason I haven’t worked out, the back was too big! I had to trim the ends of the frame. I pressed under the seam allowances on the diagonals, whipstitched the edges of the frame to the back just over the seam line, and then stitched the diagonal seams at the corners.

I cut 2 4″ squares of the ticking, turned under opposite sides, and folded them in half and stitched the ends together to make tubes. I turned them inside out and fused them to the back corners of the stitching. It would have been better to make 3 (or even a continuous pocket) and to attach them to the top of the frame. Since they’re only fused, that’s easily corrected. You might want a rod at the bottom too to make it hang straight, and maybe attach a couple of curtain weights. 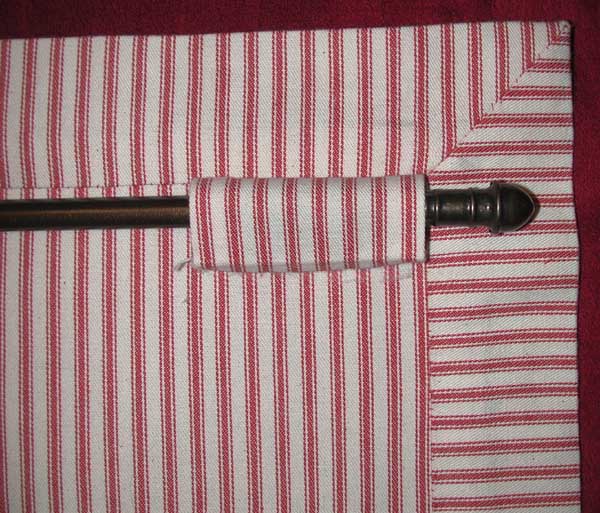 The fact that the lines in the ticking meet almost perfectly at the corners, is, I believe, dumb luck. Or “miracle” might be a better word. I think it is just an artifact of the size of the fabric and the spacing of the lines. I did envision that happening, but I don’t think I had any right to expect it. 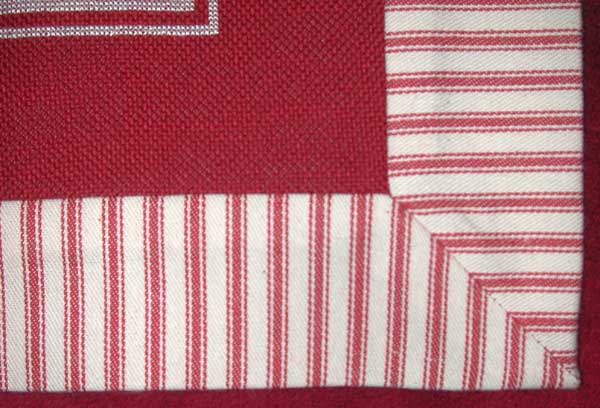 I may make a small model and try to figure out my mistakes so that I can write a tutorial. I realize that this description is too vague for anyone but a pretty experienced sewer to be able to follow. I do like the “frameyness” of it with the mitered corners and the supplies were only about $10 instead of $x00 for having it professionally framed.

Another way you could do this would be to finish the needlework by itself, without a frame, and then make a backing piece as a separate piece and then join them. Get a piece of backing material for your stitching, and put the right sides together. Stitch just past your cross stitching on 3 sides, trim the seams, turn it right side out and press. Hand-finish the 4th side. Now do something similar with two pieces of framing/backing material to make a separate, larger, rectangular piece. Finally, attach the stitching to the larger frame piece. Or rather than sewing a backing to the cross stitch, you could just turn the edges under and then fuse it to your frame piece. No mitering, no patterns needed, and less sensitive to miscalculations. Just center the stitching piece on the underneath piece.

You are currently browsing the Scarlet Quince Ramblings blog archives for June, 2015.

Your designs are true masterpieces! I have never seen anything like them before. I actually haven't stitched in quite awhile because most of the designs out there are just too simplistic for the amount of time that goes into stitching a picture. Keep up the wonderful work!