And I mean that literally!

I just posted a picture a couple of weeks ago, but I finished the second row of letters last night, and by posting again I will know later on when I got to this point. I don’t keep a stitching diary — why? I certainly wouldn’t record what I did every day but it would be good to have a single place to note when I start and finish the pages of a chart. Sometimes I write it on the page itself but I’m not very consistent about that and it isn’t something I can really go back and review.

It has taken about 5 months to get to this point. H was a lot of stitches but I really like it. In fact, I like D, G, and H. Seems to be an unfortunate pattern there. I, coming up, is not a lot of stitches and will go quickly.

You may not have noticed in the picture of letters D-H that there’s a mistake, but it’s there. (It’s a small picture, but if you know where to look you can see it.) It slowly filtered through my brain as I was working on borders. These squares have a variety of borders, so if the horizontal lines don’t line up, that doesn’t necessarily mean that there has been a mistake, but D and E do have the same border, so the lines at the bottom of those letters should line up. And I realized one day that they didn’t. Arrrgh. Yep, I’ve now added counting to my list of un-talents. The E should have 3 unstitched rows inside the top border above the figures, but I left 4. So this makes the bottom border 1 row too low. I picked out the bottom border stitches while I thought about what to do. The E didn’t take that long to stitch so I briefly considered redoing the whole thing, but it was so much work (because of the way I’m stitching) to rip the border stitches out that I quickly decided against that. I also considered just moving the border up, but there should be 2 rows between the figures and the border, and if there was only 1 row, I decided it would look too squeezed. Here’s what I did instead. The left side is the original, the right is my redo.

I picked out about the rowest 3 rows of stitches in the swirly things, then replaced them with 2 rows of stitches that taper off faster. Some of the figures are now on the flat side on the bottom, but I don’t think anyone will notice. This pattern has odd places where things aren’t symmetric where you would expect them to be, and some of the curves are much jaggier than they really need to be. (Sometimes I have smoothed out the curves; sometimes I’ve followed the chart.) I don’t really have a lot of emotional investment in this particular piece, so I’m satisfied with this solution.

We got back from Yosemite about a week and a half ago and I am finally almost caught up. (What? You didn’t notice I was gone? That’s because of the secrets I learned in the Orient which enable me to pass invisibly among men.)

We stayed in the Wawona Hotel which is one of the lodges in the park and did day hikes. The first day we hiked in the west end of the Yosemite Valley, and here is El Capitan: 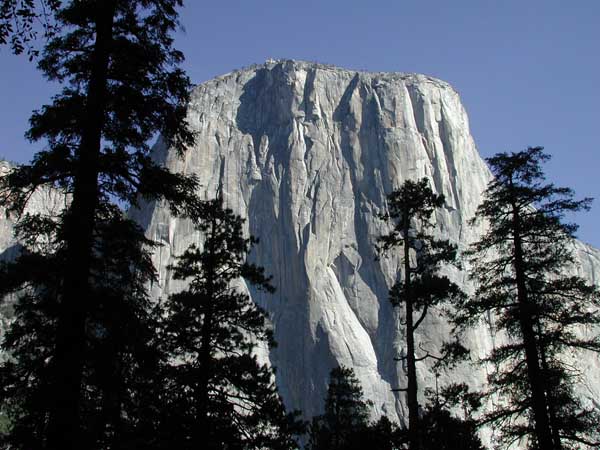 We were walking along the Merced River when a black bear came out of the woods on the other side and had himself a bath. 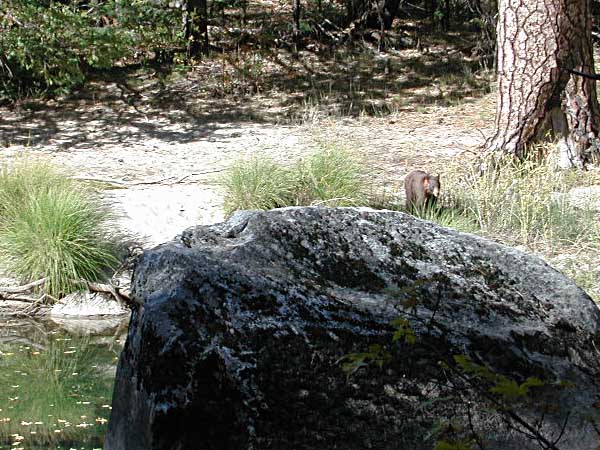 So much for my theory that the bears might be hibernating. I had brought a couple of bags of trail snacks and it was very hard to know what to do with them — the park doesn’t want you to leave them in your car or the bears will rip your car apart, and the hotel doesn’t want them in the rooms because they’ll attract mice. Yeah, carry them with you, but you can’t walk all the time (especially me).

This is Cathedral Peak, same day. I didn’t connect it with the Bierstadt painting of Cathedral Rock until later — his view is from way down the valley. 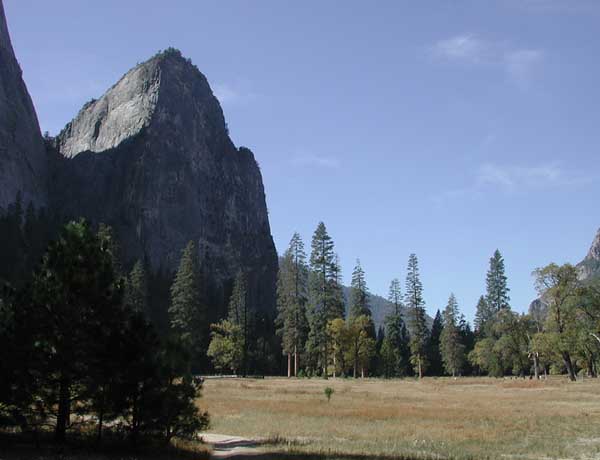 The next day my knee was trashed so we had a mostly driving day. We drove out the Tioga Road which crosses the park east-west and is a winding chain of sheer drops with no guard rails. We stopped at Tenaya Lake, famous from the Ansel Adams photograph. 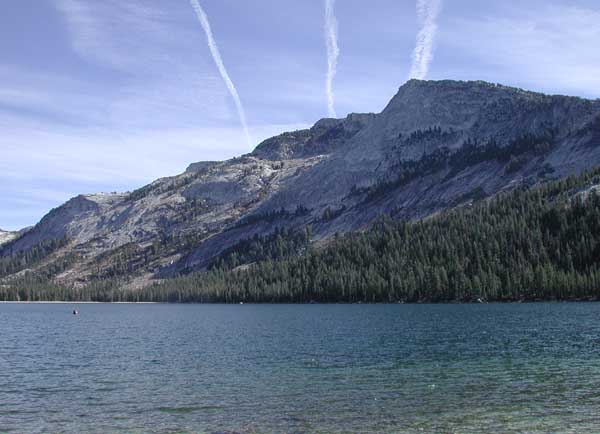 The jet trails are coming from Reno, I believe.

On to Mono Lake (actually a little east of the park). I had a vague impression that the tufa towers were caused by pollution but that’s not quite the story. 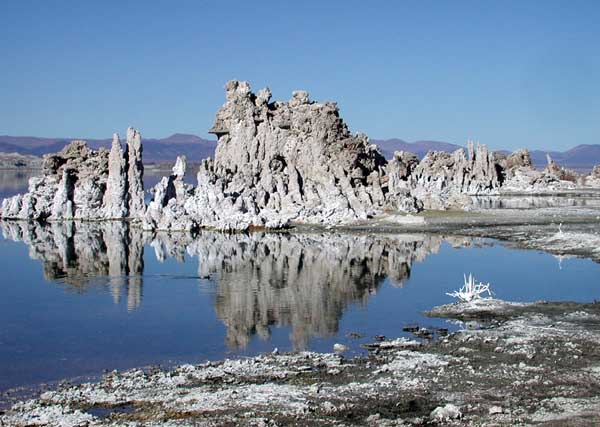 They form natually underwater when the calcium carbonate in the lake water reacts with something in the fresh water entering the lake. They’re visible now because Los Angeles has been siphoning water off from the feeder streams for years. This has been very bad for the lake and everything trying to live in it. A few years ago an agreement was reached that half the drop in water level would be replaced, and the lake is within about 10 feet of the target level, if I recall. The last 10 feet will take much longer because of the larger area to fill. The bird in the water is a western grebe. This does not count as an animal picture.

We stopped at Tuolumne meadow on the way back and walked to Soda Springs (a naturally carbonated spring) just for a place to go. We saw this coyote on the way back. 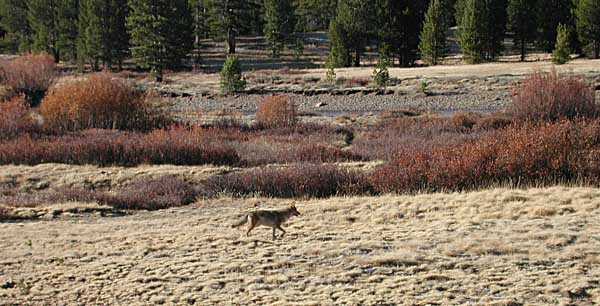 We visited a couple of sequoia groves. Here’s the upper grove at Mariposa Grove: 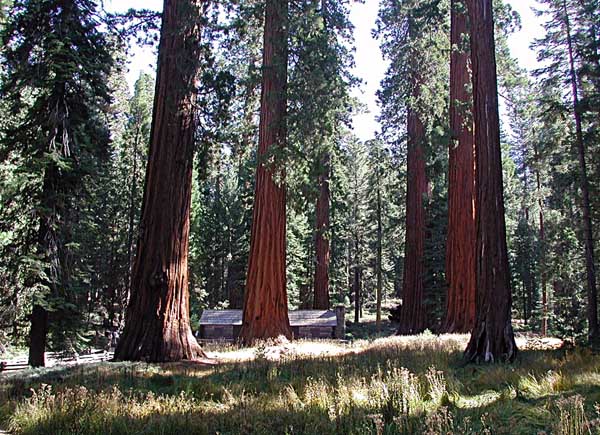 The building is a museum which was closed for the winter. And yes, we saw the tree in Bierstadt’s painting, the Grizzly Giant!

They had been burning the grove (lower down; you can’t tell from this picture). For a long time there haven’t been any new sequoias getting started because they need fire, and the Park Service has been on a no-fires mission for years and years. A managed burn clears away the pine litter on the ground so the seeds can germinate, the ash nourishes the young trees, and the fire doesn’t hurt the old trees.

The Mariposa grove was full of tame animals. I refused to take pictures of the mule deer, although I pointed some out to a woman who was taking pictures of every animal she saw. She crept up on the deer very slowly, taking pictures all the way, only to discover that the deer probably would only have moved if she had kicked it (and maybe not then). I do like ground squirrels: 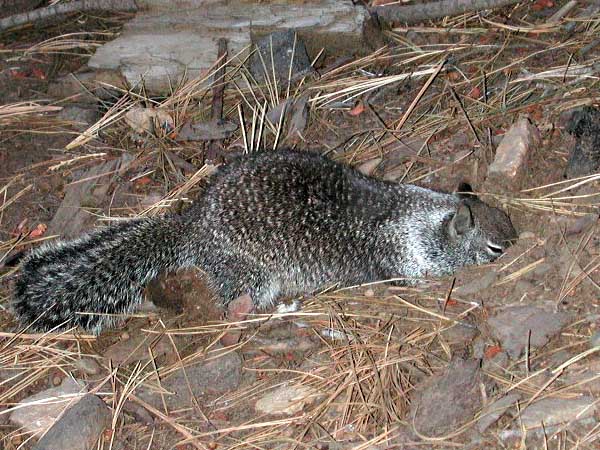 The markings on their fur look like feathers. This guy was completely focused on his digging and only moved when I stepped around him.

I took a lot of pictures of Half Dome from various angles. Here’s Half Dome and Tenaya canyon from Glacier Point: 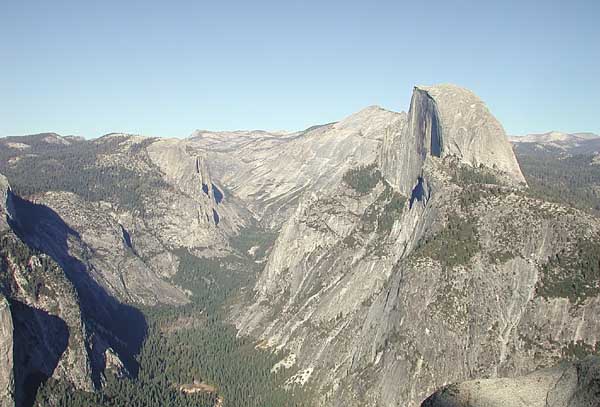 When we got home, I went through a lot of Bierstadt paintings on a couple of web sites to see what his views were like. He painted at least 100 pictures of Yosemite’s domes, peaks, waterfalls, and canyons, but as far as I can find, not a single picture of Half Dome. That seems very strange. Maybe Half Dome wasn’t really famous until Ansel Adams photographed it.

We also walked down Tenaya canyon one day. It passes Mirror Lake which is the brown spot among the trees at the lower center of the picture. The Park Service has allowed it to silt up (they used to dredge it each year), and while there may be water after the snow melts, in the fall it’s just a sand pit. It’s on a list of “most overrated” destinations in Yosemite. One guy who hadn’t gotten the word asked us where Mirror Lake was, and was very put out when we told him he was looking at it.

We had beautiful weather with chilly nights and daytime highs of about 70, and it was really a relaxing trip, in no small part because there was no TV, no radio, no internet, no email, no cell service (we were apparently the ONLY people in Yosemite not getting cell service, but I think they were the ones losing by it — what sense is there in climbing to a beautiful spot and calling the office?).

Someone asked, so even though these aren’t finished yet, here is D through H. 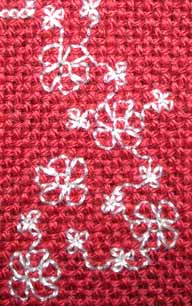 D, E, and G are finished except for the borders. The letter F itself is finished, there is just topstitching to do. Most of the vacant area to the right of the F will be filled with this stuff. Recall that this is 22-count fabric so the little leaves are REALLY tiny. I had to figure out a good order to do these little figures so that the stitches support each other instead of pulling under the threads in the fabric. Obviously there’s a lot to do on the H, but I feel very happy with my progress. I started this in late June so this is a little over 4 months and it’s a LOT of stitches.

Coming up are some letters that will have some red topstitching over white crosses. I haven’t figured out yet what the closest shade of red is. J has just a little but P is almost solid white with a feather topstitched in red. I’m looking forward to that … not because I like topstitching, anything but, but it will be different.

You are currently browsing the Scarlet Quince Ramblings blog archives for November, 2008.

I love how realistic the patterns turn out.