I am really close to finishing the last square in my alphabet. Last night I realized that it’s probably only a couple more days of stitching, AND I HAVE NOTHING ELSE LINED UP. Making this more urgent is the fact that we’ve postponed our trip to Big Bend Ranch (again) which was going to be this coming week. Now, I don’t stitch every single day, but that’s because I’m busy. Not having something I could stitch, time permitting, is a whole different thing.

As it happens, I have access to lots of patterns

and enough floss so that I could at least make a start on something, but when I rifled through my fabric stash, I only had small pieces. Annoyingly, I have two pieces that used to be about 4 feet square but have had 3+ foot square chunks cut out of them. So they’re these big L’s on which the legs are too skinny for anything useful.

So I went roaring out to Hobby Lobby, because they’re closed tomorrow. At one time they had aida cloth on bolts (no more). But at least they had cut pieces that were big enough for something besides a dish cloth. I got two 30″ x 36″ pieces, one in 18-count and one in 22-count. Those will be big enough for anything I’m likely to want to start (I still haven’t completely made up my mind WHAT I’m going to do next).

Although I’ve always preferred to stitch one thing at a time, I now see one major benefit to rotating several projects: you don’t suddenly run out of something to stitch.

I keep thinking about those stupid L’s and MRA asked if it’s de rigueur to use up all your fabric. It’s not, of course (although if you don’t work on whittling away at your small pieces they build up and up just in case there’s something they aren’t too small for) but they still bug me. Finally it occurred to me that they would be good for bell-pulls. I’ve never been much into bell-pulls, but my mother took a needlepoint class once, in which she learned lots of different stitches and made a sort of autobiographical bell-pull. It was kind of cool. It had the date of her wedding anniversary, 3 little girls (my sisters and me), and I really can’t remember what else, but a lot of things that were meaningful to her. One of my sisters has it now and I haven’t seen it in a long time.

I was watching “The Heiress” last night on TV. Olivia de Havilland is a wealthy young woman without many other attractions, wooed by a fortune hunter (Montgomery Clift) who abandons her when her father threatens to disinherit her, then returns to try his luck a second time after her father dies. She spends a lot of time doing needlework in a frame attached to a floor stand. I’ve seen the movie before but never noticed how Olivia was stitching — two handed! At first I thought she had two needles going, but no. She had one hand above the frame, and the other underneath. She would poke the needle into her canvas from above with her right hand, then pull it through with the left, and still with the left, poke the needle into the underside of the canvas, then pull it through with the right. She was going fast!

I keep my left hand under the fabric as I stitch, but it’s not really doing anything. I just keep a finger near where I’m stitching and I’m not even sure what the purpose is. I do all the stitching with my right hand which involves constantly moving it from the top of the fabric to the underside and back, which is certainly not optimal. So I tried this two-handed stitching. The most awkward thing is inserting the needle into the fabric with my left hand — it’s very clumsy and it’s hard to position the needle accurately, but I think with practice that might go away.

It appeared to me that Olivia de Havilland must have had considerable practice stitching this way. Although they didn’t show closeups of her work, she clearly wasn’t making random stitches (as I would have been stitching at that speed with my left hand). And I don’t think it is a technique that would occur to you first crack out of the box, so either someone coached her or she was a stitcher in real life. Do any of you stitch this way? 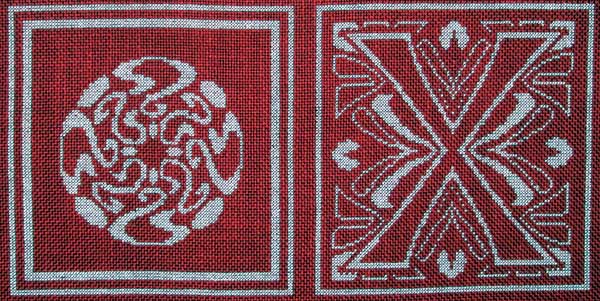 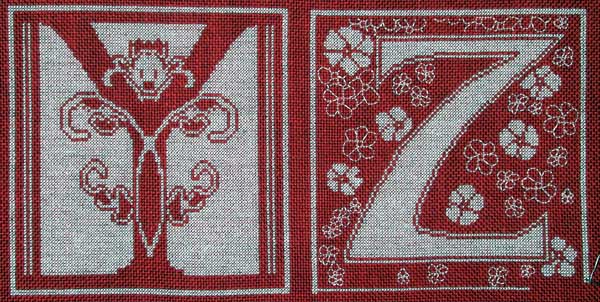 You are currently browsing the Scarlet Quince Ramblings blog archives for February, 2010.

I am nearing completion of your free pattern and am extremely impressed with the quality and detail of your charts.

Anemones and Lilacs in a Blue Vase
Odilon Redon