We had a thunderstorm the other night with a tornado watch, and began getting marble-sized hail almost immediately. We were watching it hail when a BOOMING sound began on the roof. We couldn’t think what it could be, but then the biggest hail I’ve ever seen began landing on the deck and in the yard. 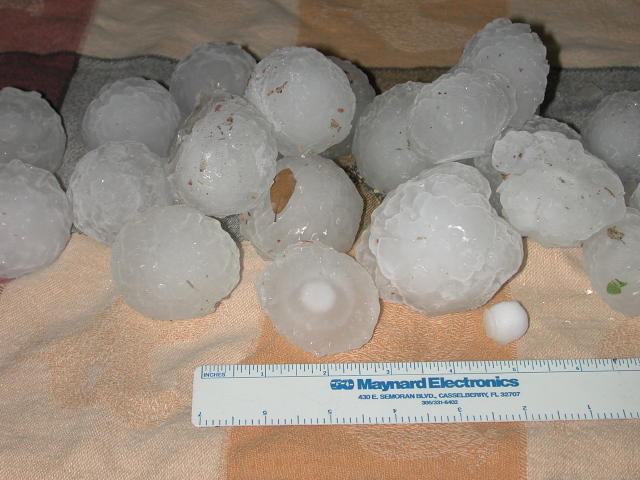 Naturally we had to collect some.Â  The largest ones weighed 4 ounces and were almost as big as a baseball (a hardball, not a softball).Â  Just imagine the wind required to keep hail aloft until it weighs 4 ounces!Â  This kind of hail isn’t unusual in Austin but I’ve never seen it before, although I’ve seen cars that have been pummeled by large hail.Â  People who were caught out in their cars this time had their windshields craze on the first strike and disintegrate on the second.Â  And just about every year there is a swath of houses getting new roofs because of hail damage.Â  We had to have the roof replaced only 3 years ago due to much smaller hail than this.Â  I hope the newness of the roof means that it survived.Â  We haven’t checked yet, although I can see that our next-door neighbors, who also had a new roof 3 years ago have some broken shingles.

Roofing company signs sprouted the next day like mushrooms after a rain.Â  It’s a great town if you’re in the roofing business.

I’ve been informed by someone from France that the word “poÃ«tes” which appears on our new chart of Chat Noir is not a French word and that it should be “poÃ¨tes”. Here’s the funny thing: I didn’t make this up, it is the way the original poster read. Further, it’s pretty clear that, although you sometimes see printed material where part of a character didn’t print, the umlaut is not a broken accent; it’s a deliberate umlaut. (I’m sure the French don’t call it an umlaut, but I’m not opening that can of worms.) So why did the poster say poÃ«tes?

I had a lot of trouble translating the French because I don’t speak French and the online translation services I tried translated some words but not all. Sometimes you can work translation software backwards by guessing what a word means, giving the English, and seeing what it translates into (or at least you can eliminate words that way). But none of the words I could think of relating to poets, poetry, poems, poetry readings, translate into poÃ«tes. Finally I got what I hoped was the gist from a web site giving some background on this poster, but I’m sure it’s not a very exact translation.

I just did a Google search for poÃ«tes and found it on some pages that appear to be French. If I copy it into French-English dictionaries they either say it isn’t a word, pretend I really entered poÃ¨tes, or change or remove the Ã« and tell me that poates (or in one case, potes) isn’t a word. I can believe that but it doesn’t help.

If I thought the original poster was somehow just WRONG, I’d change the umlaut to an accent (and since the chart contains a couple of accents, this is something any stitcher could easily do whether I change the chart or not). But it seems like a French poster, produced in France by native French speakers, somehow must be correct even if I can’t prove it.

As they used to say in Dear Abby, sign me … Baffled In Austin

I just got finished updating the map, which necessitated figuring out how I created it in the first place. This has been on my to-do list for a long time but I was spurred on to get it done by a request from one of my wholesale customers. She sold a chart to someone who lives in Baker Lake, Nunavut, who was very anxious to have his own X on the map. Although the map really reflects the locations I’ve sold to directly, I was happy to fake up something for someone living in such an out-of-the-way place. 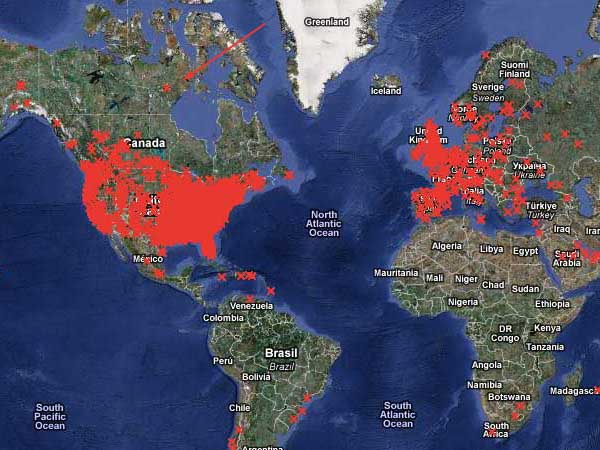 Have you ever heard of Nunavut? If so, you must be Canadian (or better at geography than I am). It turns out that it was only separated from the Northwest Territories (which I have heard of) in 1999, so I have a little bit of an excuse.

My main excuse for being so ignorant of geography is that I was in grade school during the cold war and what we had was military-industrial geography. Our textbook took the same approach to each country we studied: first, how many square miles it was. Then, since they realized that didn’t convey much, they would superimpose an outline of the country on an outline of whatever part of the US it was closest in size to. This was supposed to make it fun. But knowing that Remotistan is about the same size as Nebraska also doesn’t convey anything (except maybe a veiled suggestion that Remotistan sure doesn’t amount to much; countries that got compared to Rhode Island were obviously ridiculous). They would tell us what language or languages were spoken there — if it wasn’t English, there was an implication that the residents had got it wrong. We covered the form of government they had: democracy (correct) or other (incorrect). Then they would get down to a list of the products considered useful to the US. This always seemed to be grains and metals and minerals, no finished goods. The implication seemed to be that yes, the country might make precision-engineered cars or fine linens or fancy chocolates, but whatever they made, we could do it better. Sometimes they had a picture of apple-cheeked children in funny clothes, but that was about IT. I suppose we were shown where the country fit on the world map, but if you haven’t absorbed the location of country A, learning that country B is just to the east of it doesn’t help. (You can’t explain what chicken-fried steak is to someone who doesn’t know what chicken-fried chicken is.) It was really quite ugly and in a way I’m glad I didn’t learn anything. I certainly hope that geography is no longer being taught that way. But bit by bit, I’m filling in the gaps, and I’m glad to know where Nunavut is!

We almost always have a warm spell starting around the middle of February and into early March, although it often gets cold again later.Â  This year I decided (partly spurred on by a coupon for 99 cent tomato plants at Red Barn) that I was going to get a jump on the season and get my tomatoes going.Â  Red Barn claims to carry varieties that do well in Austin.Â  We’ll see if they do or not.Â  They had a couple of varieties that say they are well-adapted to heat, one of which is supposed to keep bearing even in 100-degree heat.Â  (I got 2 of that kind.)Â  They were all nice healthy-looking plants, 7″ or 8″ high, and I intended to get them into the ground quickly.Â  I got a couple of herbs too, some spearmint because I used to have some but I think it died, and some thyme just because it smelled so good.Â  The young leaves have purple veins too, which is pretty.

But then, like an idiot, I left all the plants in the front yard, and the deer ate all but about an inch of each tomato plant.Â  (They ate a hunk of the thyme, too, but I guess it was a little strong for them, since they didn’t finish it off.)Â  Luckily each plant had at least one leaf left, so most of them are growing more leaves.Â  (This also gives me an excuse for not having planted them yet, since otherwise I don’t know what my excuse would be.)

I brought them in temporarily when it was supposed to get cold, which gave Jemima a chance to pretend she lives in a tomato bed. 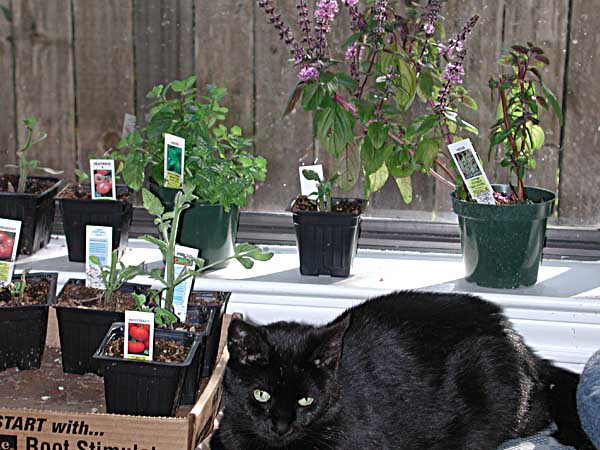 You are currently browsing the Scarlet Quince Ramblings blog archives for March, 2009.

Your designs are true masterpieces! I have never seen anything like them before. I actually haven't stitched in quite awhile because most of the designs out there are just too simplistic for the amount of time that goes into stitching a picture. Keep up the wonderful work!