A couple of people recommended the Dritz tailor’s marking set to me. I got one and have been using it for a while, and wanted to share my thoughts.

First, it’s a really nice product. It’s essentially a mechanical pencil with a soft grip. It uses ceramic leads (I don’t quite know what that means) and comes with 9, 3 each in white, green, and hot pink. They make very fine marks so it’s great for gridding. It has an eraser that removes the marks, but you can also remove them easily with a damp cloth. I have not had any trouble with the lines rubbing out before I’m finished with them. It will certainly last me the rest of my life, though lead refills are available. There’s plenty of eraser. It winds out when you twist the barrel of the pencil, and it’s about 1″ long. The refill package includes a new eraser.

The big disadvantage is that it’s pretty expensive for a marking pencil — you’ll pay $12-15, probably. However, when you consider what standard fabric markers are like, it’s probably worth it. Felt tip pen markers always seem to have dried up by the second time I use them. Fabric marking pencils (in my experience) somehow acquire numerous breaks in the lead, so that when you go to use them, you just have a jagged pencil end. You sharpen the pencil and then the next little segment falls out. Even if the lead isn’t broken, you can never get as fine a line as is possible with this pencil.

I looked at the reviews on Amazon. The people who didn’t like it said that little bits broke off every time they marked with it (I haven’t had that happen), or that it doesn’t leave a good mark on delicate fabric. I can imagine that since it’s a pretty hard lead, but on cross stitch fabric, it works fine.

Is it worth the money? Probably, depending on your finances. As you can tell, I had pretty much given up on fabric markers, but now that I am using it for my horizontal grid lines, instead of sewing them, it is saving me a lot of time. It’s true that conventional pencils cost a lot less, but you don’t have to use up very many of them sharpening them before you have spent as much as this one costs. And it’s worth pointing out that it is not expensive compared to a decent mechanical pencil, only compared to crummy fabric pencils.

Here’s what the lines look like on 22-count aida: 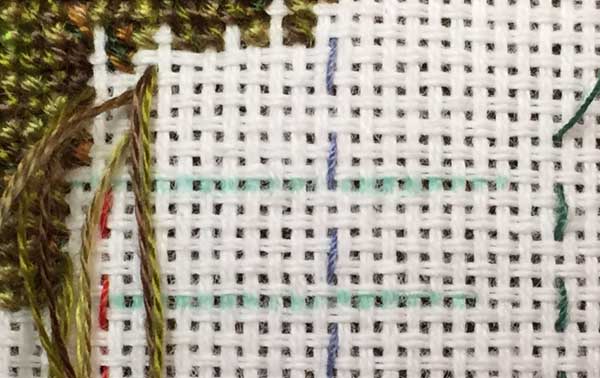 This is the only site I have ordered from that actually allows you to put your choice of fabric count and get an accurate amount of not just fabric, but floss too!!!!