We picked up the four cats yesterday and stacked their carriers in the laundry room overnight so that they would stay warm and we could keep an eye on them. The good news is that they all came through the surgery fine. The bad news is that one of the females had kittens about 5 or 6 weeks ago. They said she probably wasn’t still nursing but I let her go a bit ahead of schedule. (They say you should monitor females for 24 hours after surgery but if they’re nursing the kittens need them.) I haven’t seen the kittens yet but she will no doubt bring them to the food at some point and then we get to do this again. I hope that if we can catch them while they’re very young they can be socialized and adopted. The Humane Society has a bunch of adult cats for adoption, but kittens always go quickly.

We were also able to get one of the Humane Society’s good traps, and caught one more cat last night, which went to be fixed this morning. We re-set the trap, but only caught a possum.

The Humane Society here, and I imagine most places, has a trap/spay-neuter/release program which they say is the only proven humane way to control feral cat populations. They spay or neuter the cats, give pain medication, worm them, clean their ears, give them a flea treatment, a dose of penicillin, and a rabies shot, all for free. Quite a deal. You can have other things done for a fee. I don’t know if the vets donate their services but I’m sure they at least give them a reduced rate. I checked into having our vet spay or neuter these cats and it would have been several hundred dollars, depending on how many were females. They also “tip” the left ear (remove about 1/4″ from the eartip) — they say this is the universal sign that a feral cat has been spayed or neutered, and it’s mandatory. Then they go back to wherever they came from, and live out their lives but without increasing the population. It feels like a bit of an uphill battle (and it must seem like a mountain to the people at the Humane Society) but I’m sure it makes things better than they would be if nothing were done.

We have quite a few feral cats in our neighborhood. When the people who had been feeding them moved away, and we started feeding them, we found that there were even more than we had thought. There’s a female who had a litter last year and about 6 adolescent cats, mostly her kittens but maybe not all. The big yellow tom who is responsible for all these kittens hasn’t been around in a long time — the coyotes may have gotten him (yes, that’s a thing that happens to outdoor cats here). I think some of these cats just heard that there was a good buffet at our house and probably trek a ways to get here.

The Humane Society has volunteer trappers who will live-trap the cats, take them to be “fixed”, and then release them, but we were never successful in getting in touch with any of the trappers. Finally we decided we had to do it ourselves. The first (lame) plan was to leave just a small opening where they could get into the garage, wait until they were inside, and block the rest of the opening. Then (a miracle occurs here) we catch them and stuff them into carriers. When I talked to the feral cat coordinator at the Humane Society, I learned that they have drop traps they’ll lend. Yep, it’s like a Wiley Coyote trap, a box that props up and when you pull a string it falls down. So we got one and set it up in the garage so the wild cats could get used to it. 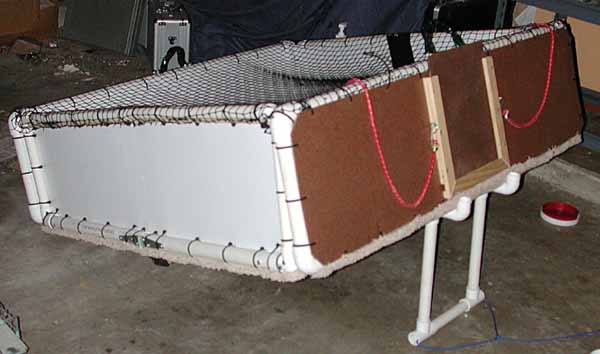 Today is one of the spay/neuter clinic days so we didn’t put out food last night and this morning five cats showed up for breakfast. Four went under the trap and one decided to walk around on top. Figuring four was better than none, we sprang the trap and then it was pandemonium. The cats began flinging themselves at the mesh covering the top of the trap which was very exciting and nerve-wracking. We had been warned that this would happen so we were ready to hold the trap down (did you know that pound for pound, cats are stronger than titanium? or maybe it’s only steel. Anyway …) and cover it with a sheet to calm the cats. There is a port on one side of the trap where you can connect a covered crate, then by judiciously uncovering the trap, the cats are encouraged to go into the crate, where it’s hidier. So before long we had four individually crated cats who are being spayed and/or neutered right about now. We have to pick them up tonight and keep them until they have recovered from the anaesthetic and are doing OK post-op. They are supposed to be indoors too, which will be interesting. They’ll have to be in the laundry room and I hope they’re quiet because Lucky will go berserk if he thinks more cats might be coming to live here.

I hope we can get a couple of small traps that we can bait and leave to try to catch the other cats in. We borrowed a have-a-heart trap that is supposedly cat-size, but a cat couldn’t even turn around in this thing, and we have had no success with it in the past. But some of the people dropping cats off this morning had a different kind of trap which was larger and, they say, works better.

These are beautiful cats and I wish we could find homes for them, but we were told that it just doesn’t work. They’re wild and won’t ever be tame. Most of them have gotten a little used to us and go about their business as long as we don’t get too close, but some disappear if they even see you looking at them.

You are currently browsing the Scarlet Quince Ramblings blog archives for October, 2008.

I love to look at all cross stitch patterns found on the internet - and your site definitely earns the right to state "the Fine Art" of cross stitch. Absolutely Beautiful - I will look forward to working on your patterns. Thanks!