We finally managed to take our trip to Big Bend Ranch after numerous postponements! For those of you not from Texas, it’s our largest state park, 300,000 acres, and adjacent to Big Bend National Park. It’s basically Chihuahuan desert wilderness. (It isn’t a ranch now, but it used to be, and there are still cattle there. Now that I say it, I’m not sure how that’s different from a ranch. They have a U-Roundup twice a year. You supply the excess testosterone and maybe the horse and they provide the rest.) 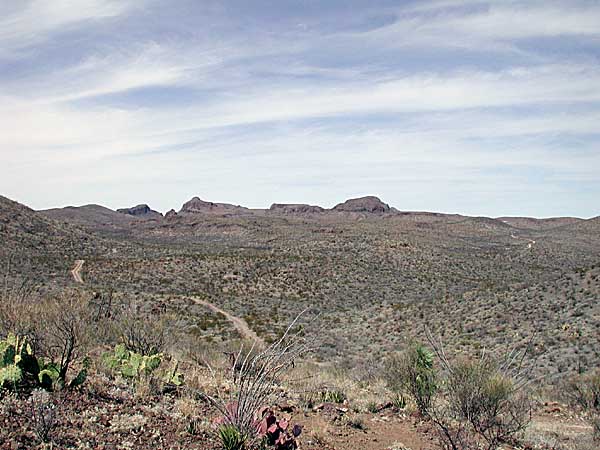 This is typical scenery. There are clumps of grass here and there, but mostly the ground is bare dirt. The olive-green bushes that dot the hills are creosote. It has yellow flowers when it blooms but most of it wasn’t in flower. In the foreground you can see green prickly pear and purple prickly pear. Just to the left of the purple prickly pear is lechuguilla (the small green clump; it’s an agave) and ocotillo (the dead-looking sticks). These are all very common plants. Apparently there had been rain sometime recently because the ocotillo had buds. Between rains, ocotillo loses all its leaves and flowers and is just a mass of thorns. Then, when it rains, the leaves and flowers magically return.

Here are the flowers (from a different trip): 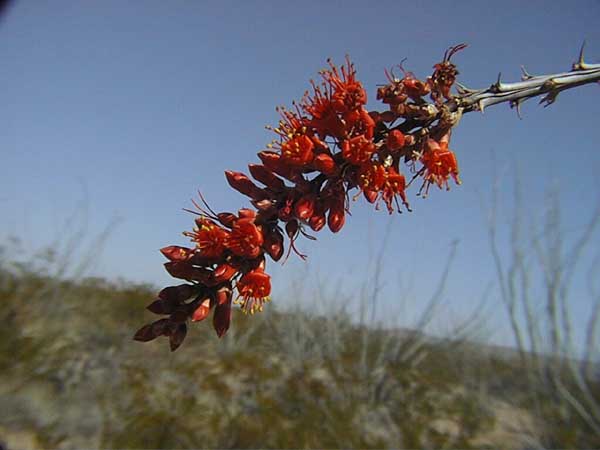 We drove to Marfa on a Tuesday, about 8 hours if you’re going 80, and spent the night there. We thought of going on to Presidio but hadn’t checked to find out if there was anyplace to stay in Presidio, and couldn’t get a cell signal. (Our planning sometimes leaves something to be desired.) Marfa is a strange place. It seems well on its way to becoming a ghost town. I would say that about half the buildings in the business district are vacant.

In the morning we headed south to Big Bend Ranch. The correct approach would have been to drive the 60 miles to Presidio on paved road, and enter the park from the south, minimizing our time on washboarded dirt roads, but instead we came in on the north side, which gave us about 3 times as much dirt road fun as we otherwise would have had [red line]. 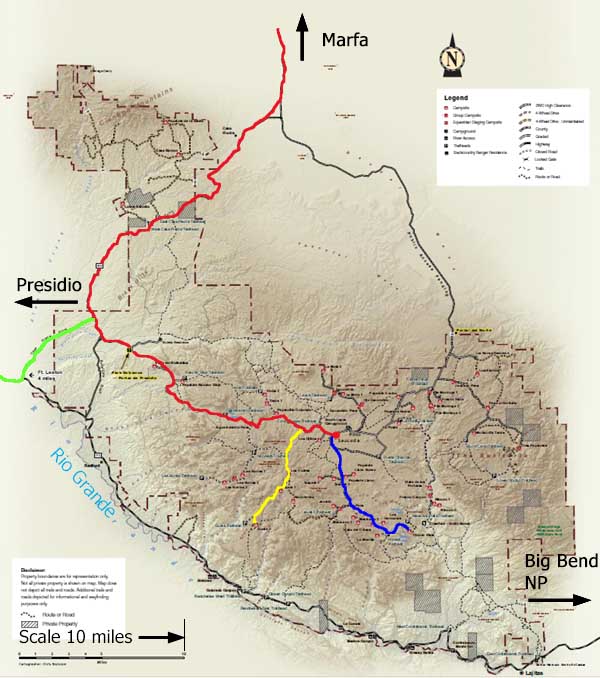 We could only go about 10-20 mph because we were pulling a trailer with the FJ40 on it. We had intended to leave the truck and trailer at the headquarters at Sauceda [red dot] but when we came to a horse pen area where we could ditch them, we did, and went on to Sauceda to pick up our camping permit in the FJ40.

We then backtracked to the Gaule road (a high-clearance 4WD road) and drove to our camp site at Gaule 2 [yellow line]. The weather was perfect, sunny and clear and about 70 degrees. It took us about 3 hours to get there and the road was not too scary for me. A view along the way: 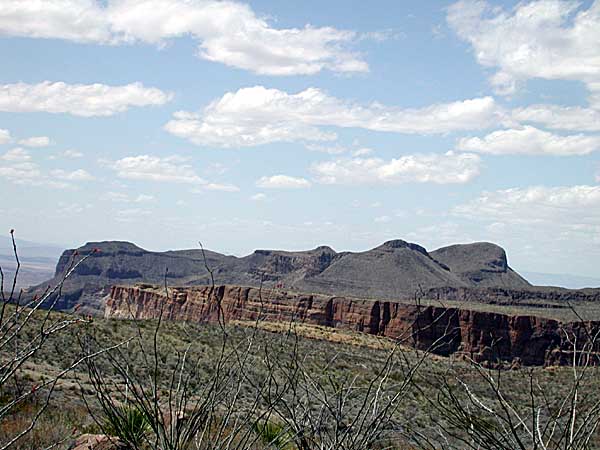 The whole Big Bend area was once volcanic and this gives an idea of the depth of the lava flows.

This is part of the view from our camp site: 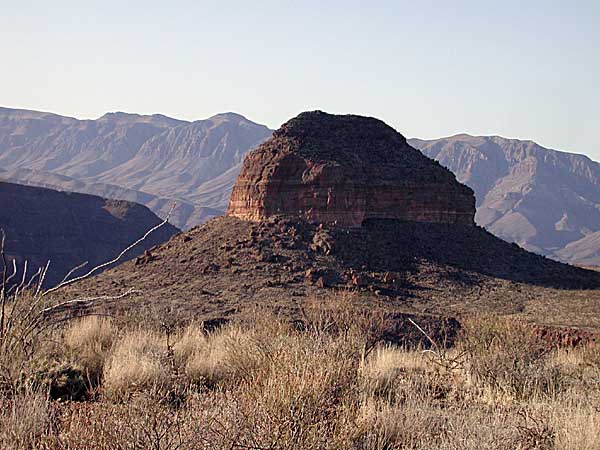 We took this to be the lava plug from a partly eroded volcano. Pretty nice camp site, eh?

We explored, enjoyed the scenery, took pictures of flowers, and generally just hung out the rest of the day. I was going to stake out the best tent site in case someone else showed up and was really surprised when MRA told me that it’s one party per camp site. We’ve hardly ever had a whole camp site to ourselves.

We were using a borrowed tent (our tent got stinky tent disease so I washed it, which didn’t moderate the smell much but did turn the waterproofing into awful dandruff, so MRA threw it away. Too bad. I liked that tent, before the smell.) and we had a little trouble pitching it in the gale-force wind that came up in the late afternoon, but we eventually managed with the help of all the stakes and a few large rocks. My hat, which has a chin strap with bead to keep it on in windy situations was driving me crazy because the bead slips. I plundered a thin shock cord and cord lock from the day pack and was much happier after that.

Much of the yucca was in bloom. 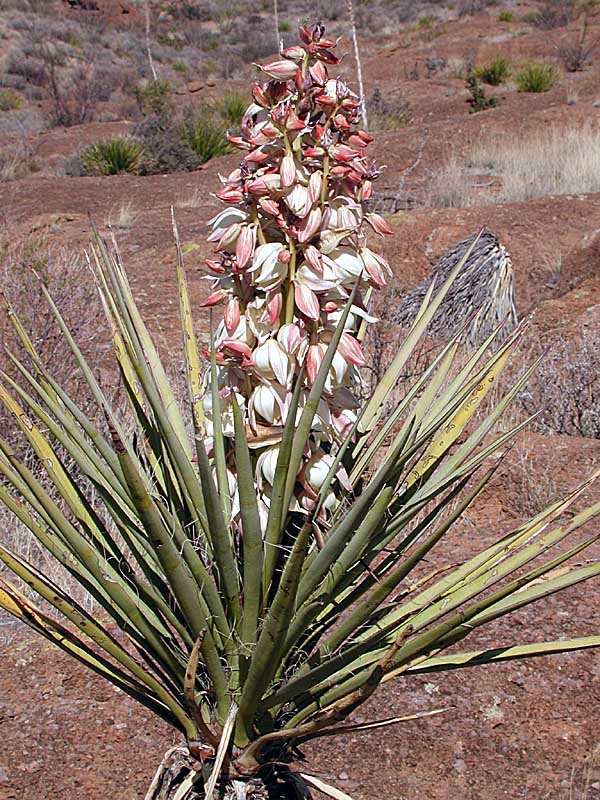 And there was Dalea mollis nearby 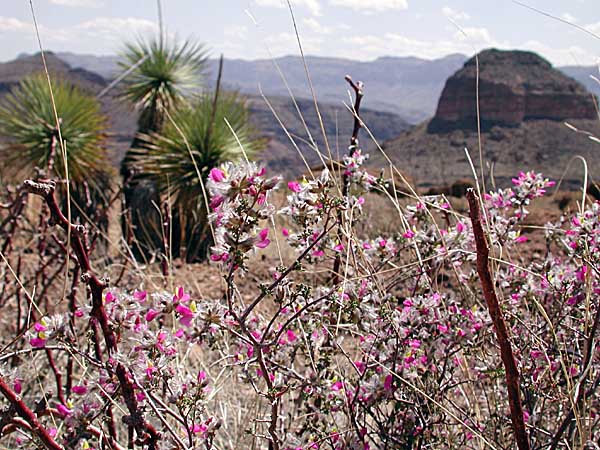 and lots of claret cup cactus. 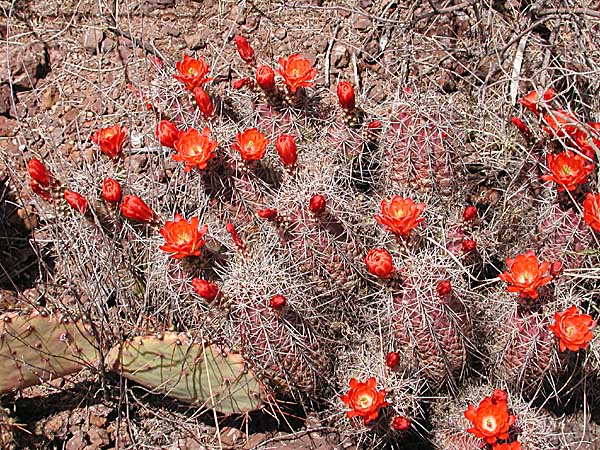 This pancake cactus was starting to bloom 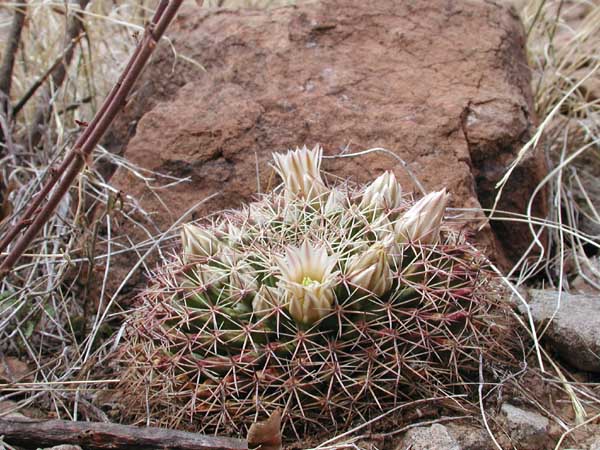 but most of the cacti were just heartbreakingly close. 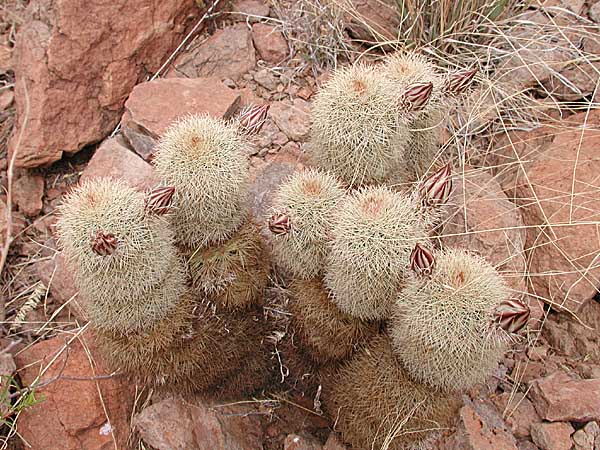 The night was mild, with pretty good stars, but the moon was more than half full, so we couldn’t see as many stars as I’d hoped. Then another perfect day. 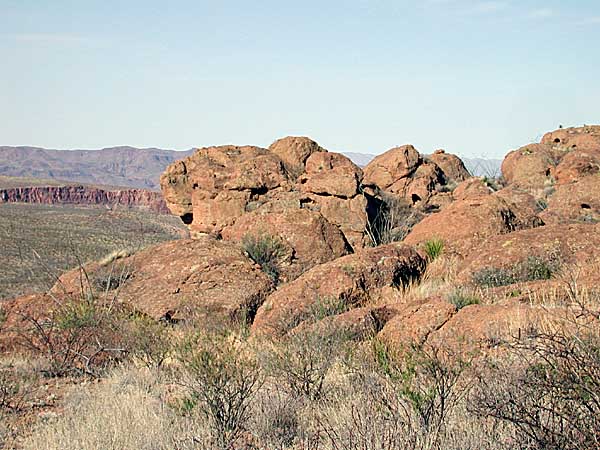 We returned along the same road (but it always looks different going in the opposite direction), had a go at the indoor plumbing at Sauceda, then headed out for our second night’s camp site at Chorro Vista [blue line on the map]. 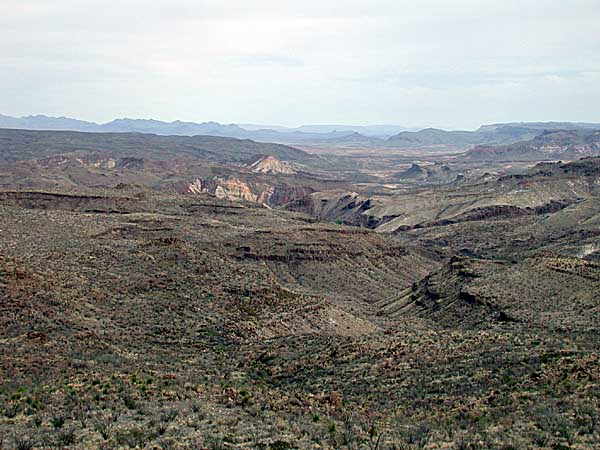 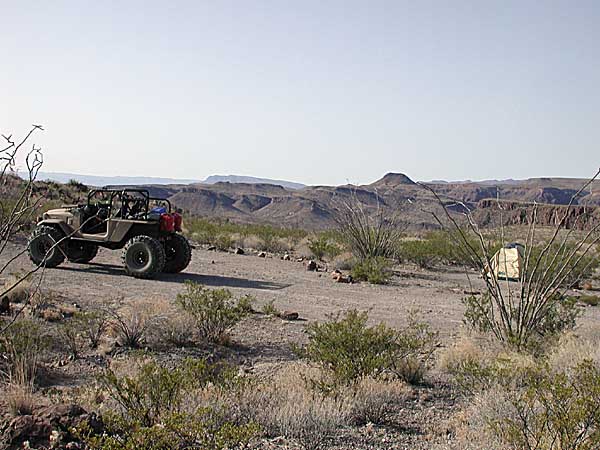 And by climbing a dozen or so feet we had a view in all directions. This is the rim of El Solitario, an ancient collapsed volcano. It ejected 25-30 times as much material as Mt. St. Helens, then collapsed in on itself. It’s several miles in diameter. 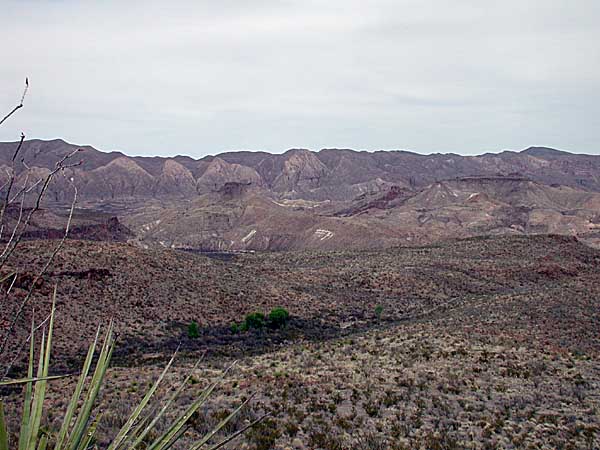 Another very temperate night, then back to the trailer to load up. Inevitably we ran into a guy at the horse pens who wanted to know “Whatcha got there?” I wish MRA had a handout for all these gabby men (women never ask about the FJ40). We exited the park the correct way this time (red line then onto the green line), drove to Presidio, then as far as Alpine, where we spent the night, and home the next day. It was such a relaxing trip — I think the best vacations are the ones where you’re completely away from news, computers, phones, TVs, etc. It was dusty camping but having tried both now, I would say I prefer dust to mud. Sometime it might be nice to camp on clean, dry grass.

It has rained a little, but actually this turned out to be a good day to SEE ducks. Our usual joke is that we won’t see any ducks but we won’t know why until we go — no ducks, ducks too far away, sun in the wrong place, raining, too dark, etc. — but this time it worked out. We went down to Hornsby Bend (which sounds as if it might be nice but is actually the local sewage ponds) and there were some interesting ducks and water birds!

There were about 20 white pelicans (which we’ve NEVER seen around here before), a cinnamon teal (also very unusual around here), and several American pipits! A pipit looks like a cross between a thrush and a sparrow, and we probably wouldn’t have figured out what it was except that I noticed that it had black legs. It turns out that not many birds have black legs.

Then there was the usual horde of shovellers, lots of ruddy ducks, the odd green-winged teal, a couple of buffleheads (probably my favorite duck; they’re so perky), and several eared grebes starting to get their summer “ears”. There was a cormorant trying to dry its wings, without any luck since it’s thoroughly overcast.

I wished I had taken my camera because there were masses of early flowers (ok, weeds). Swathes of purple mints and masses of yellow mustards. The wood floor was covered with intensely green bedstraw (Galium aparine). It has tiny white flowers but its most noticeable feature is those spring-green leaves, in whorls of 6. It’s a dreary day but that’s just the way (some) spring days should be. (Obviously, you can take the girl out of Michigan but you can’t take the Michigan out of the girl.)

We stopped at the Applied Materials ponds on the way home, as always. For some reason it always has completely different ducks. This time we saw gadwalls, American widgeons, scaups, a redhead, and a pied-billed grebe.

All in all, a good day for ducks!

You are currently browsing the Scarlet Quince Ramblings blog archives for March, 2010.

I found your site by accident and was very interested that you offer practical solutions to problems that you may run into. I have never seen a frame calculator. Thank you very much for that. No other site that I have been to offers that! It's like they want you to guess. So happy to have found you. I saved you on my desktop so that I will NOT lose you. Read just a few of your offers to problems and am so fascinated. Keep up the good work for returnees and beginners alike!!!