When I first realized there were fires all around us, I started making a list of things to take if we needed to evacuate and gathering things up. Now that the panic is over (not that we were really ever in danger) I’ve been thinking more about the whole subject of being prepared to evacuate, what to take, what things I wouldn’t want to lose, and if we did lose most everything, what would we actually replace?

It’s hard to be rational about all this. One person I talked to said that she hated to leave her house because then she would not be able to protect it. Fire is apparently the monster under the bed of my mind — when we return from a trip I always half expect to find the house burned down. From what, I don’t know — not wildfires, since these were such a shock. Tornadoes are much more likely here and yet I don’t worry much about them, nor have I ever considering making an evacuation kit or even list in the event of a tornado. We don’t have a basement and in the event of a tornado you’re supposed to go into a bathroom, preferably one with no windows, and hang onto the pipes (picture me lying on the floor in the bathroom clinging to the pipes under the sink as the house blows away over me). The most worrying I have ever done about that scenario is to wonder how we would get all three cats into that bathroom, particularly the one who won’t allow us to pick her up.

Here are the conclusions I’ve come to mulling all this over.

I should make a detailed, prioritized list of the things we would want to gather up if we needed to get out. To the extent possible, the things on the list should be already gathered/packed and ready to go. (Picture albums, which we rarely look at, could be packed — art on the walls could not, unless we want to let a possible disaster run our lives.) I found a good sample list and thoughts on an emergency plan here. One thing I would grab for sure would be the computer (just the box, not the peripherals) and lots of the things on that list are on the computer. Or in the safe deposit box — but I hadn’t thought of taking the key!

For me, the main things to save would be the cats, photo albums (and I’ve been scanning those and putting them online), needlework (finished and un), art, some jewelry and heirlooms, the computer. My grandmother was a big collector of glass and crystal, and I have some of her things. I would hate to lose them but it’s hardly the kind of thing you can take if you’re fleeing for your life.

Which led me to the thought: there’s so much STUFF around here. The vast majority of it is never used and I wish there were a lot less of it. Admittedly, it’s much easier for me to identify things belonging to MRA that should go away (it’s my stuff but his junk) and he probably feels the same way about my things. In some cases I can see it: there’s a needleboard for pressing velvet without crushing it which I used for making a velvet jacket, what, 30 years ago? Am I really ever going to make anything out of velvet again? I know some people say “If you haven’t used it in a year, get rid of it.” But there ARE things that we actually do use only once every few years, but that would be expensive to replace, like the sleeping bags. Do we really need an entire wall of computer science books that are rarely referred to? Clearly not, but then those belong to MRA.

One of the things I have put off doing, over and over, is a household inventory. You’re supposed to do that, right? So I bought one of those little books where you can go room to room and write down all the things in that room. Would you like my little book? It’s in new condition. But it would not be that much work to take digital photos of everything, mess and all, and burn a CD or two. (Once, MANY years ago, MRA spent a day getting things out, taking pictures, putting them away, and finally he began to wonder why the roll of film in the camera wasn’t used up. Then he discovered that there WAS no film in the camera. Bless his heart, he put film in and did it all again. We still have those pictures in the safe deposit box, but many of the things IN the pictures are gone. I wouldn’t go to that much trouble — just point the camera into closets and cupboards.) But in reality, although it’s hard to make up my mind that I NO LONGER NEED any given item, there are lots of things that I certainly wouldn’t replace if they were gone, and that’s an easier way to think about it. So I should still take the pictures for insurance purposes, but maybe I can start slowly getting rid of things I wouldn’t replace. If it makes me happy to own something that falls into that category, for some reason, I don’t have to get rid of it (yet) — there are plenty of things I’m not especially attached to. Baby steps! 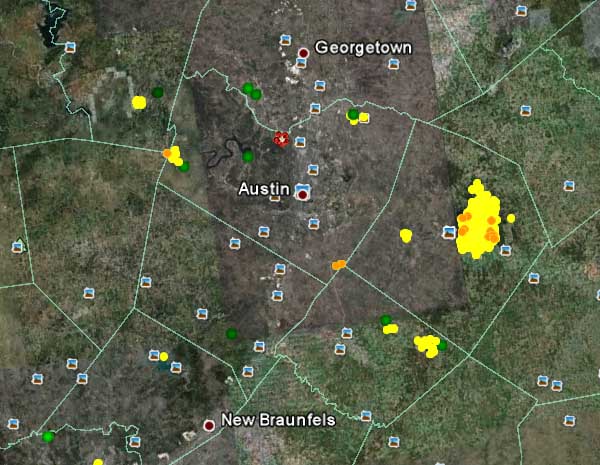 All the yellow, orange, and green spots are various fires, and the quince flower is where we are. We got a lot of wind but no rain with Hurricane Lee, which made landfall in Louisiana and went east. The fires were made much worse by all the wind, and the fact that it basically hasn’t rained here in a year. I completely freaked out when I found out about them and was getting all set to evacuate. Once I realized that they were not actually heading toward us, I calmed down. It has been amazingly difficult to get information (or accurate information). The Weather Underground web site, for example, has staunchly insisted that we were having winds of 1 mile per hour even as the fire reports said the winds were 25-35 mph. Fortunately, the wind is gone, so I hope they will start to be able to contain these fires.

The large fire to the east of us started in the Lost Pines, which is a stand of loblolly pines which are the remnants of pine forest which covered much of Texas during the Ice Age. All but 100 of 6000 acres have burned. I suppose there have been wildfires there before so I hope it will come back. Here’s a video of how fast the fire spread.

You are currently browsing the Scarlet Quince Ramblings blog archives for September, 2011.

My first SQ project arrived Friday (Cafe Terrace by Night - Van Gogh). The chart is extraordinarily well composed. Already I see evidence of the painting before I have even started. I didn't buy the labels but will go back and order them. They are an invaluable tool.