If you use plastic bobbins, you have a problem with the floss labels coming unstuck. They stick at first, but then one side or the other starts to lift. My bobbins have a slightly textured side, while the other side is smooth. The labels don’t seem to adhere reliably to either side. We switched to different labels at one point in the hopes of solving this problem, but while the new labels seem to stick a little better, they still tend to lift.

I called my label supplier today and explained the problem and asked what they would recommend. They explained that sticking to plastic is tricky because plastic, being a petroleum product, emits vapors which acts against the adhesive. They do have a type of label I haven’t tried yet, which I’m told has their “most aggressive adhesive”. I’ve requested samples and I really hope this solves the problem. (I still have a lot of cardboard bobbins, but I bought 1000 plastic bobbins from Nordic Needle and as I finish the floss on a cardboard bobbin, I’m replacing it with plastic.) My bobbins have a fairly large hole in the top, so I press the two sides of the label together at the hole, so it’s sticking to itself. This insures that the label won’t hop right off the bobbin, but the corners still lift, and pick up cat hair and what have you and that just makes the lifting problem worse.

One person told me she uses Scotch Giftwrap tape (in the purple dispenser) to attach her labels to plastic bobbins and she has no problem with them coming off. I was thinking that that was a double-sided tape, but it doesn’t seem to be, so now I’m not sure what the special advantage of that tape would be, unless it’s that it disappears better than standard tape. I don’t know if it’s stickier. But I hate to tell people they need to use tape on supposedly sticky labels, so I’m keeping my fingers crossed for “aggressive adhesive”.

Here’s a preview of the floss labels with color swatches: 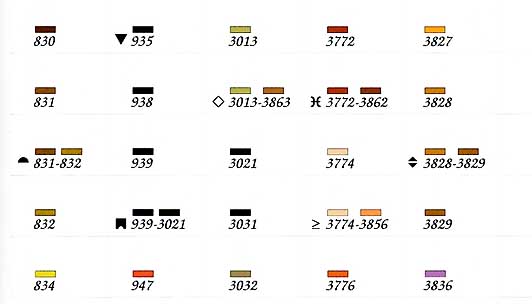 If you look carefully, you can see the label edges — the bottoms of the labels are just below the numbers. They’re laid out like the current labels, but just have color swatches above the numbers. These are about actual size (the labels are 1″ wide by 5/8″ high). The color is better than it appears — for example, 939 and 3021 are clearly different colors on the real labels.

There’s some work to do before we can make them available, but here’s what we’re thinking, and we’d like to know how you feel about the whole thing.

None of this is set in stone (yet). What are your opinions, questions, concerns?

You are currently browsing the Scarlet Quince Ramblings blog archives for July, 2011.

Thanks for making such beautiful patterns that are so easy to follow.