We’ve had quite a few requests for Andrew Wyeth’s work, most recently by someone who was enthusiastic enough to track down who I needed to contact about licensing it.Â  I emailed and got a quick (and admittedly, courteous)Â  response that they don’t license the work except for “art historical books and limited posters”.Â  If I were 8 years old, I would wonder why some of these people are so stuck up, but I’m supposed to be more mature than that.

I am not deeply grieved, in reality, because I am not Andrew Wyeth’s biggest fan.Â  Of course his work is very good, technically, but the colors are not to my taste, and the subject matter doesn’t move me (except for “Christina’s World”, which creeps me out — what sicko left that poor woman way out in the field dragging herself back to the house?).

My father was a big Wyeth fan, and I have been dragged to the Brandywine River Museum,Â  which has a lot of assorted Wyeths, way more than I deserve.Â  My dad was a big museum-goer in general, and it was always something of an ordeal, because there was no such thing as leaving before we had seen everything.Â  That’s more fun some places than others, but it’s always exhausting.Â  I’ve seen everything at the Franklin Institute (but don’t remember anything except the Foucault pendulum).Â  I’ve seen everything at the Franklin Mint, where they have a gallery with every commemorative coin and little model car that they’ve ever made.Â  Maybe, on all those occasions, he was tired too, and was waiting for me to say I was ready to go.Â  I never sensed that but it is theoretically possible.Â Â  When “Tora! Tora! Tora!” was in the theaters (yes, a LONG time ago) he wanted to go and I said fine.Â  We saw it, and then the next movie was going to be “Herbie the Mixed-Up Volkswagen” or some title like that.Â  He asked if I wanted to stay and see it and we did one of these “do you?” back-and-forth things and ended up staying.Â  In retrospect, I am pretty sure that he didn’t want to see it, but at the time I couldn’t tell, and didn’t want to say I didn’t want to see it in case he did.

Anyway, fair or unfair, that’s one more thing I hold against Andrew Wyeth (the museum trips, not the movie.Â  The movie is Walt Disney’s fault.)

As you can see, I am now twittering.Â  The latest tweets appear at the side of the blog page, or you can click the link to see more on Twitter.Â  This is not going to be stream of consciousness by any means, but I did think it might be a useful way to announce additions and changes on the web site between newsletters, for those who want to know what’s going on between newsletters.

I confess that I’m not very clued in or sold on social networking.Â  I don’t get a lot of it, frankly.Â  For a pretty technical person, I may not be all the way to being a Luddite, but I’m not at all an early adopter, either.Â  So I’m basically sticking one toe in the water here.Â  If the tweets are of interest, they’ll stay — if not, they will disappear.

Posted in Web waz | Comments Off

I see I haven’t posted any of the redwork alphabet in over 8 months! Let’s get down to it. 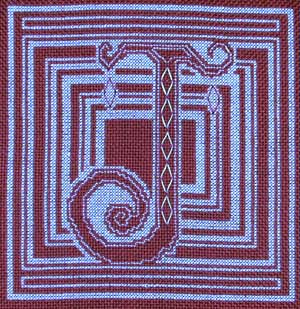 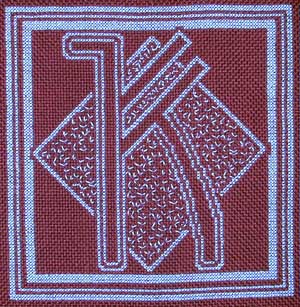 J took 38 days (there was time out for the Hardanger cube in there. This was the first letter with red top-stitching, but it doesn’t amount to much. I don’t really care for J.

K took 20 days. All those little chicken scratches were very finicky to do, and it was hard finding good paths through. It’s also hard to anchor the floss under it. I had to try to start and finish at cross stitching. I like the effect though. 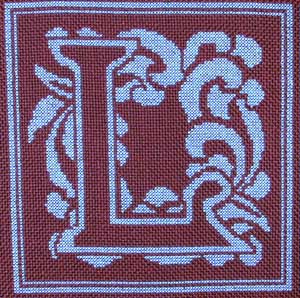 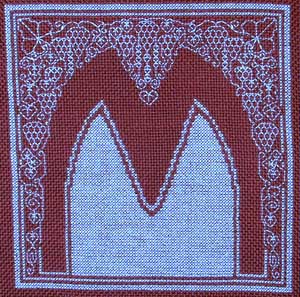 I’ve been taking notes on the pattern pages, and I’ve lost M so I don’t know how long it took.Â  I’m sure it was awhile, with such a big stitched area.Â  I am fairly fed up with the grapevine motif.Â  This is the last of it though. This is another letter that doesn’t match the picture on the chart cover. 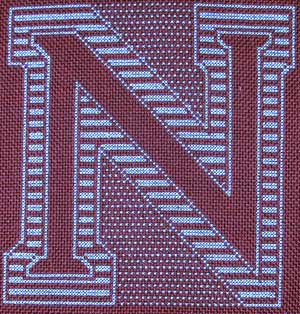 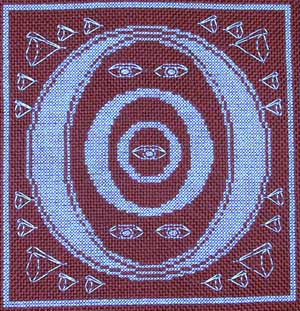 N was a headache.Â  Unlike all the other letters, it is 100 stitches wide but only 98 high.Â  This REALLY doesn’t work for my grid of letters.Â  Fortunately I was able to extend the pattern and it is actually more symmetric than if I had stitched it as charted (that last double line at the bottom of the legs of the N was charted as a single line).Â

O is just weird.Â  Those are EYES.Â  What’s up with that?Â  Is this some kind of French pun?Â  I think the word for “eyes” is “yeux” which I pronounce “yose” (rhymes with hose) but maybe the y is supposed to be silent, and it’s really “ohs” (but what are the chances they call the letter o “oh”?) On the other hand, what else would you call it? Did I mention I don’t know French? These each took about 20 days. 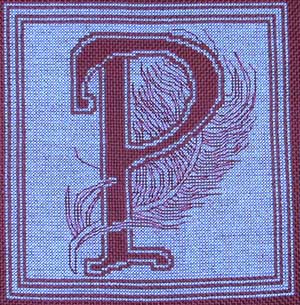 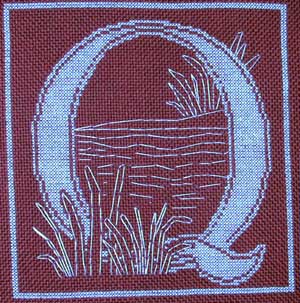 I was looking forward to P because I liked the design and because of the red top-stitching.Â  What was I thinking?Â  This was the hardest letter so far.Â  There are a lot of weird jumps like over 5 and up 2 and I had to keep drawing boxes on the chart to figure out what they were.Â  And I made so many mistakes!Â  One line I stitched over and over and it just wasn’t ending in the right place.Â  I counted and checked and couldn’t find any mistakes, ripped it out, and the same thing happened.Â  I think I stitched it 5 times before I got it right.Â  But it’s pretty, and so is Q.Â  P took 33 days, Q 25.Â  (I’m not getting as much time to stitch as I used to.Â  I’m only averaging about an hour a night at this point.) 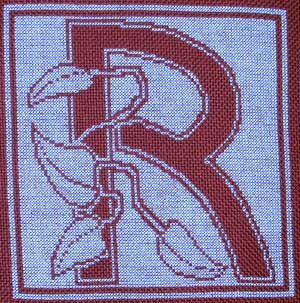 R took almost a month, and no wonder.Â  I like it though — it reminds me of filet crochet (which I can’t do).Â  I’m currently about half-way through S which is another mostly solid letter.Â  There’s a little too much of that if you ask me, although in a way they’re easier than the ones with more blank spaces (less counting).

Sorry all these photos are so whopperjawed but as you know, photographing needlework is tricky!

Someone recently suggested a couple of Chagall paintings and they really were quite beautiful. There have been other Chagall suggestions in the past and somehow I’ve never done anything about them. Chagall’s rights are managed by the Artist Rights Society which really makes life easy — I can just send an email to my contact there and (usually months later) get a response. This time the answer came quickly and it was no, the Chagall estate will not give permission to use his work in cross stitch. It’s frustrating, because I think that if they saw the Scarlet Quince web site they might at least consider it, and I hinted that. But maybe they wouldn’t, and ARS considers it more important to protect their clients from being annoyed than to bombard them with “opportunities” they aren’t interested in.

We’ve also had No’s to Picasso, Matisse, and Magritte. I have it in the back of my mind to wait a few years and try again. Maybe then someone different will be making the decisions, or they’ll need money more, or … Scarlet Quince will be famous? You never know.

You are currently browsing the Scarlet Quince Ramblings blog archives for August, 2009.

I enjoy your patterns so much - am currently about 1/3 of the way through 'Main Street, Murnau' and am very much enjoying it.

Eucharis, A Girl with a Basket of Fruit
Lord Frederic Leighton