Once in a while, a package I’ve shipped doesn’t arrive when expected, and I get an email asking if I have a tracking number. I always say, “We don’t ship with tracking because things almost always arrive even if they take longer than they should, so please give it a bit more time and I’m sure it will arrive, and we’ll replace it if it doesn’t.” Just about always, people get their orders within a day of asking where it is (which is very odd). My feeling has always been that (given the very few orders that really get lost) it is more cost-effective to just replace them than to pay for tracking on every shipment. I think the only package that ever got lost, within the US, was sent to an address where no one was home for 6 months, and when they returned, surprise, their package wasn’t there. Not so much lost as stolen.

But recently there has been a spate (where spate = 3 or 4) of orders that took a lot longer than they should have to arrive, which I reshipped. So I looked into tracking.

I found that basically the Postal Service doesn’t do tracking. (They claim that they handle too much mail to scan every piece — like anyone is asking for that anyway.) You can get delivery confirmation, but that only tells you that the package has or has not arrived, but not where it is. I’m not worried about people saying they didn’t get their order when they really did, so that doesn’t help. And I doubt that that little tag with the bar code leads the post office to handle those pieces any more carefully. (I once sent something certified mail and they didn’t ever scan it so I got no information and they were completely unrepentant. I know the person I talked to about it WASN’T sorry, but couldn’t they have SAID “sorry” anyway?) The only service that includes actual tracking is Express Mail, which of course is much more expensive, particularly outside the US. We could switch to UPS — UPS tracks everything — but it also costs quite a bit more than ordinary mail, plus UPS is particularly destructive, so everything would have to go in boxes which adds to the cost of shipping, and would make the packages heavier, which adds again to the cost of shipping. And UPS outside North America is absurdly expensive.

Maybe there’s something I’m missing about why tracking has to cost so much. But it seems to me that there’s a business opportunity for someone to offer non-express shipping of small packages with tracking at a reasonable price. I would think that the Postal Service intends to force people to use Express Mail if they want tracking, except they don’t make it at all clear that that’s the case.

And back to the original problem — a package I shipped to Canada on November 16 arrived, finally, on December 30. Not to some village on the Arctic Circle — to a city. The reshipment sent on December 15 hasn’t arrived yet. I know there’s snow in the midwest, and the holidays are just over, but that is ridiculous.

As I was lying in bed this morning thinking about getting up (it doesn’t do to rush into these things) there was a tremendous BOOM, as if Big Bird had flown into a window. I got up and asked MRA what that was? He said there was a flash associated with it so apparently a transformer had blown up. Sure enough, no electricity.

The first thing that occurred to me is that I can’t fill orders. Then I remembered that one had requested express shipping. Can’t email her to tell her the order won’t go out today — I could call her, if only I could get to her phone number which is only on the computer.

So what CAN I do? Here’s what I came up with.

When I was in high school, we lived in a house with a well (and an electric pump), and when the power was out, there wasn’t any water, either. What a drag that was!

But obviously the power is back on now, so I’m back to filling orders. That alternative day sounded kind of nice…

One of the oddest things people do here is wrap lights around the trunks and lower branches of live oaks. We don’t have conifers, mostly, so people have to decorate what they have, but it creates a very strange torso effect. I’ve never been able to take good pictures of them, so here goes with bad pictures. (The lack of a tripod makes them sort of arty, she says hopefully.) 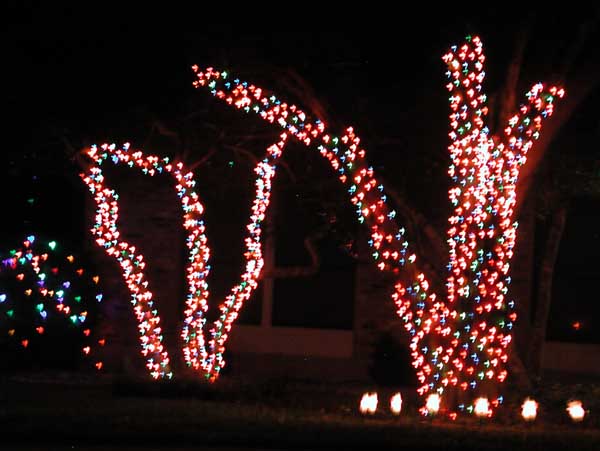 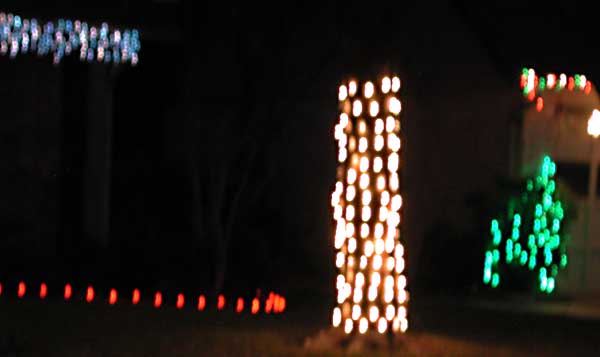 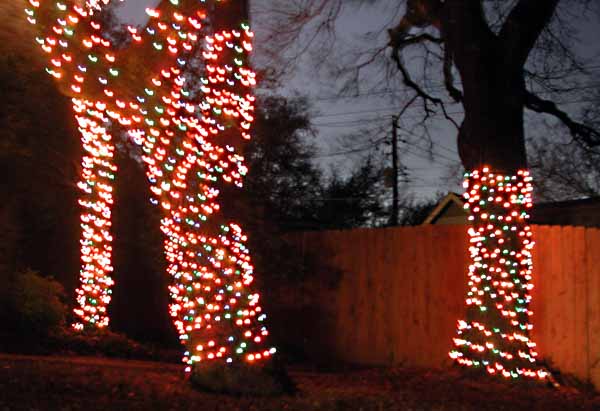 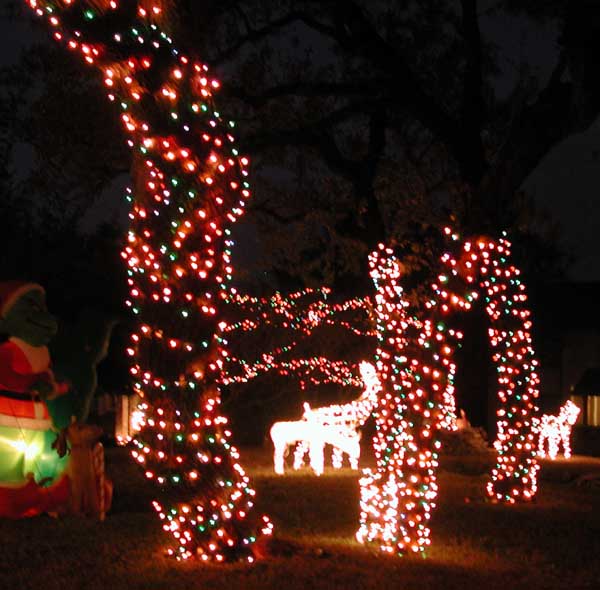 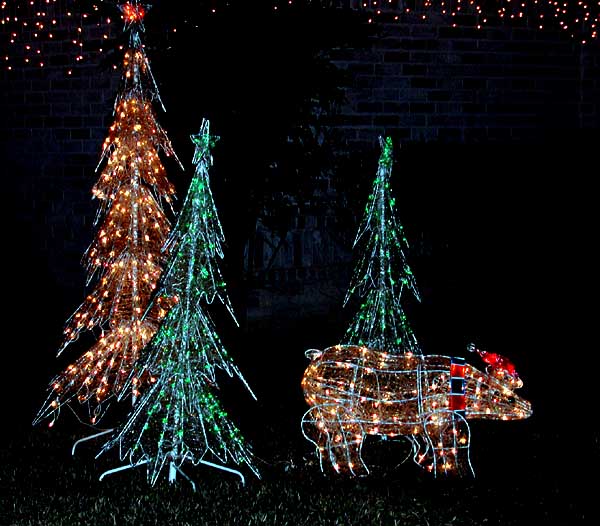 Then there’s the Christmas pig, or maybe it’s a bear. I don’t really get this. I would argue that it takes more than a Santa hat to make something a Christmas decoration, but obviously not everyone agrees.

You are currently browsing the Scarlet Quince Ramblings blog archives for January, 2010.

I enjoy the Scarlet Quince site so much: the constant additions of new patterns, the excellent tutorials on a wide variety of subjects, the Photo Gallery and your "Ramblings" all make the site a fun place to visit. I've purchased several Scarlet Quince patterns (with floss labels -- extremely helpful!) and I enjoy the anticipation of working on them as much as the stitching itself.