Sandy was a feral cat who lived in our yard and garage (we adjusted the door so it didn’t close all the way so that the wild cats could get in to eat and be out of the weather). He was almost white, with pinkish Siamese markings and blue eyes. 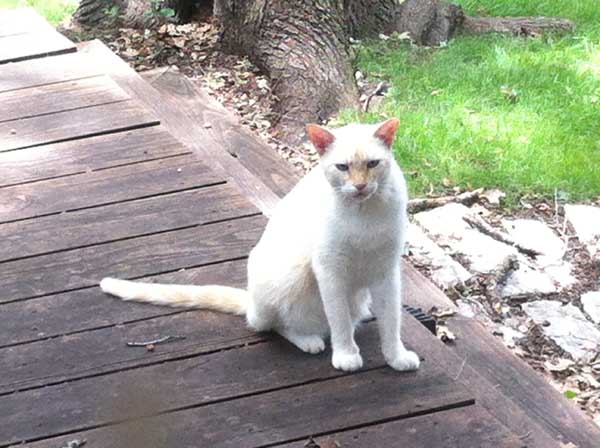 He knew exactly when it was mealtime and was always there waiting. He was very friendly and loved to bump his head against your legs, the other cats, car tires, you name it, and when he bumped you, you stayed bumped. Brindle Cat just wanted to eat but his top priority was bumping and sometimes she could hardly keep her head over the dish.

He liked to sleep on the roof of my car and often when I pulled out a cloud of cat hair would blow off. Many times there were cat footprints sliding down the windshield. In the winter he slept on a ratty old bathmat that had made it just past the door at the back of the garage and no farther. We never saw him on it but it would be warm when we touched it and Sandy would be going away. MRA began to worry that he needed more protection from the cold one winter and bought him a nice cat nest, but Sandy wouldn’t sleep in it until we put the dirty old bathmat into it.

He was almost always around somewhere, sleeping in the side yard, rolling on the sidewalk, resting on the porch, or waiting outside the garage for his late night meal, and the sight of him always made me smile. 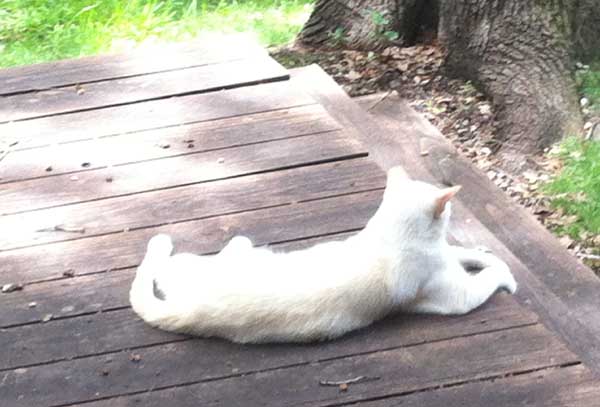 But it has been over a week since we have seen him, and we’ve come to the conclusion that something has happened to him, as things do with outdoor cats. We’ll probably never know what and maybe that’s just as well. My head accepts it but my heart keeps hoping to catch a glimpse of a little white cat. 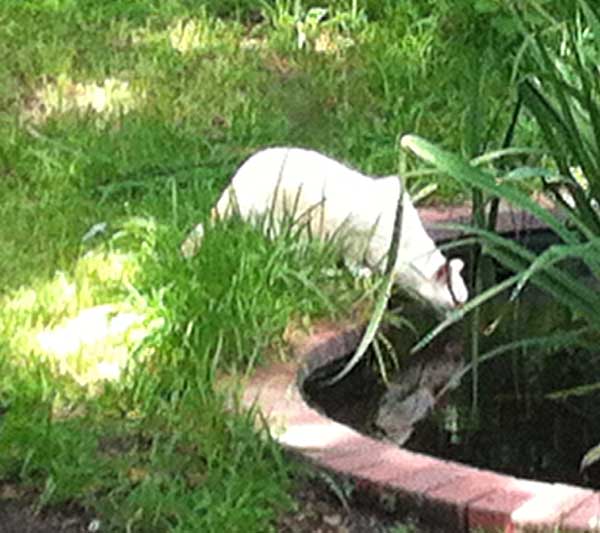 You are currently browsing the Scarlet Quince Ramblings blog archives for September, 2013.

I love to look at all cross stitch patterns found on the internet - and your site definitely earns the right to state "the Fine Art" of cross stitch. Absolutely Beautiful - I will look forward to working on your patterns. Thanks!