This is Jemima, who helps out sometimes in the mornings. She comes in quietly (I usually don’t even notice) and gets into the chair. Her contribution is to sleep. She has only been doing this recently, since I hung a smock across the back of the chair instead of putting it away. I guess the chair wasn’t cozy enough before. 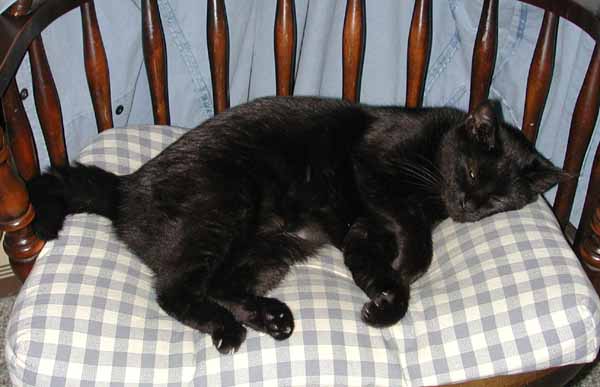 This is much more help than I typically get from the other two cats. Topsy likes to walk on the printer and push the button to print a test page, or to sit on top of the monitor and trail her tail across the screen. (Monitor-sitting is mostly a winter activity.) Lucky also likes to sit on the monitor and if he finds Topsy there, he pokes her until she goes away. This usually entails a lot of screeching and swatting. It makes it easy to work. If it’s really cold, he gets into my chair behind me and begins pushing me with his back feet until I am sitting on the edge of the chair.

Jemima only has a short tail, and she can’t move it much. Usually it sticks straight out behind her, and when she runs, it flaps up and down which is cuter than you can possibly imagine. She probably doesn’t run that much faster than the other cats (if at all) but it makes it look like she’s really going hell for leather. We found her as a stray when she was about 6 months old so we don’t know why her tail is like that — she may have been born that way, or she may have had an accident. She’s still on the wild side. She doesn’t like to be fooled with but she has gotten so she likes to be near her people, which is very nice. One of the perks of working from home!

One Response to “My Helpful Helper”

I will continue to order from Scarlet Ouince, and will share the information with my friends who stitch as well. I also wanted to thank you for speedy manner in which I received my order and thank you for the "Merry Old Santa Claus" you enclosed with my order.

The Failure of Sir Gawaine: Sir Gawaine and Sir Uwaine at the Ruined Chapel
Edward Burne-Jones