I’ve been working on the next Lady with Unicorn now for, oh, forever.Â  Weeks.Â  I’m not sure if this one (it’s Sense of Touch) is in worse shape than the others or if my standards are getting higher.Â  You can see in this picture that there’s a large area at the bottom that is faded or stained.Â  There’s an area to the left of the lady which also seems abraded — maybe damage where the tapestry was folded for a long time. 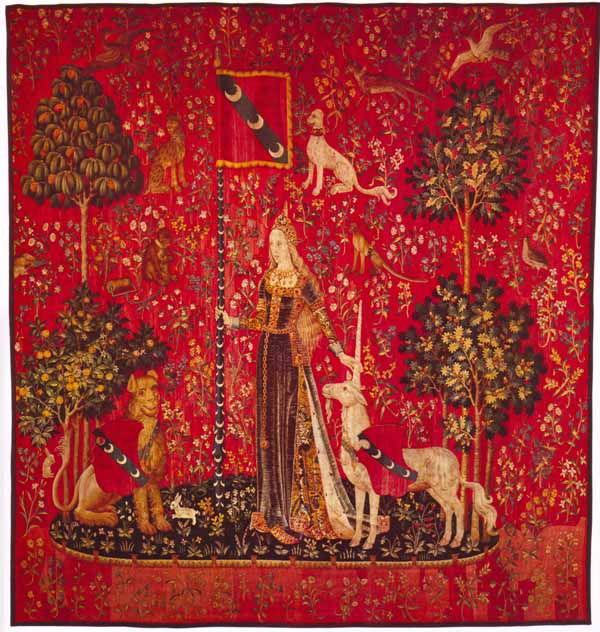 What you can’t see at this size is that there is just a lot of discoloration and spottiness everywhere.Â  The red was originally a uniform color, I’m sure, and I hope to be able to get it back to something resembling that.Â  It won’t be absolutely uniform — part of the tapestry look is the color variations — but on the other hand, there shouldn’t be 100 reds.Â  I didn’t do this for Sense of Hearing or Sense of Taste but have had something of a change in philosophy since then: to the extent possible, I think the cross stitch patterns should reflect the art as it was originally created. Obviously there can be technical problems with doing that, as well as with knowing how it once looked. But, for example, paintings have a tendency to turn yellow and/or darken with time, and fabric fades (especially greens and blues). Yellowed and faded colors can be fixed; dark colors that have turned black can’t. Once the detail disappears, it’s gone (until the original painting is cleaned).

Another thing that is odd about all these tapestries is that they’re darker at the top than the bottom (aside from the faded areas).Â  This may be due to problems with photographing something this large, although you would think that they would have set up good lights.

The New Yorker had an interesting article a while back about photographing the Hunt of the Unicorn tapestries at the Cloisters.Â  They took them down to wash and repair the backing and photographed them while they were soaking (they had made a tub big enough to soak them flat).Â  They photographed them in sections, thinking that the sections would be easy to tile together, but it turned out that the tapestries were creeping the whole time they were in water.Â  They ended up hiring a couple of mathematicians who used a supercomputer to put the pictures together.Â  You can read the article here.

4 Responses to “Lady with Unicorn: Sense of Eternity”

What beautiful patterns! Most of the patterns available are so *cheeeeezzzzzy*. I especially love the Asian art.