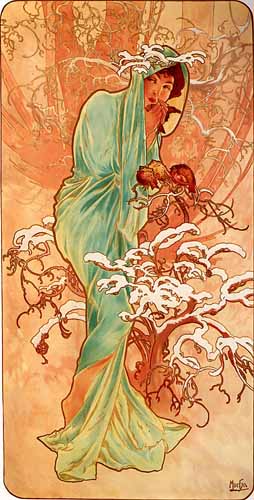 I’m currently working on a chart of Winter, the last of Alphonse Mucha’s four seasons from 1896. (He did at least one other set of seasons.) Aside from not being very rectangular, the original I’m working from is in pretty good shape, so it’s going well.Â  I’m not sure, but it looks as if Mucha usually drew his borders freehand.Â  I can make it rectangular but sometimes I wish Mucha had used a ruler.

Mucha is best known for his Art Nouveau pieces, and recently someone wrote saying that I must have made a mistake on Heraldic Chivalry, which is nothing like the Art Nouveau pieces, and it must be by some other artist. It certainly is completely different but it really is by Mucha. Even more different are his Slavic pieces, such asÂ  Jaroslava or The Apotheosis of the History of the Slavs, which is part of a series of 20 (20!) paintings known as the Slav Epic.Â  These are very serious works, or at least self-important, and I thought perhaps they were his real interest, labored over in spare moments while the Art Nouveau ads paid the bills. It turns out that he went along for years, happily dashing off beautiful women in swirling gowns, without any feeling that he was underachieving. Then he visited his home in 1900 and had some kind of epiphany. He decided he was fed up with Art Nouveau and would dedicate himself henceforward to glorifying the Slavic people. If you are a student of human nature, you won’t be surprised to hear that the Czechs didn’t appreciate this. They resented the fact that he had gone abroad to make his fame and fortune and basically regarded him as a fink.

Love, love, love the site. Most in-depth cross stitching site I have ever come across! Thanks!!