My gourd flowers turned out to be white, not yellow, and petals are separate instead of joined as I expected. For quite a while I kept wondering when I was ever going to see a flower — there would be buds in the afternoon but in the morning the flower was already shriveled up. I finally discovered that these gourds are blooming at night and the flowers don’t open until it’s fully dark. 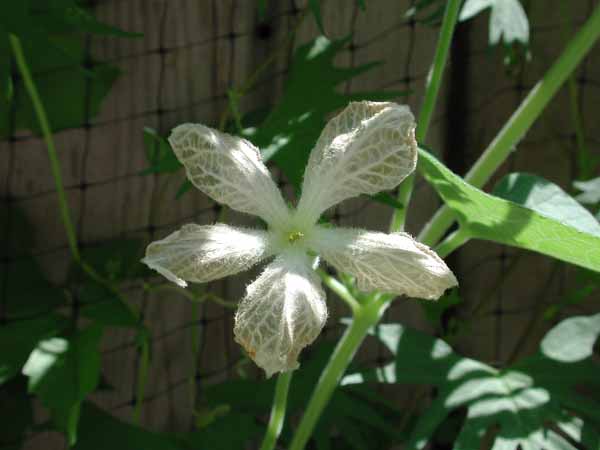 Here’s a picture taken at about 10 AM and the flower is looking pretty tired, although you can see that the flower is downy, which is neat! I tried to take some pictures of a fresh flower last night at 10 PM but I couldn’t see anything in the view finder at all so I got pictures of the top half of a flower, left half, etc. and mostly overexposed.

I looked up Cucurbita pepo and it turns out that practically everything falls into that species — zucchini, pumpkins, acorn squash, summer squash, spaghetti squash, etc. etc. but they all should have yellow flowers. I feel as if the botanists have not made a serious effort to differentiate these plants. It doesn’t seem right that squash with edible shells and squash with hard shells are the same species. I found the packet for the little warty ornamental gourds I’ve planted before but the top of the envelope is torn off so if it ever said what species they supposedly are that information is gone. But I believe what I actually have this year is Lagenaria siceria, which is a white-flowered bottle gourd blooming in the evenings. Fooey. I would have bought them anyway because they were the only gourd seeds I could find locally, but I was hoping for yellow flowers. And, need I say, flowers I didn’t have to use a flashlight to see.

This is the best cross stitch pattern site on the web. I ordered a pattern and was amazed by how quickly it arrived. I can't wait to start.